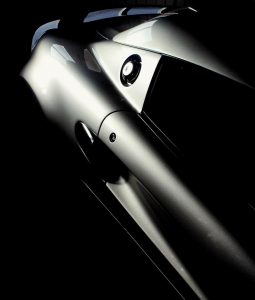 After finishing the MX5 and enjoying the increase in power for a good while it was time for a change. So after selling it I did the usual scan through the web to see what interesting cars were available out there with particular interest in two cars.

Firstly classic Mini’s as I was thinking of the possibility of re-shelling/rebuilding my K-Mini so I was looking for anything from running cars to bare shells. I went to see a low mileage rolling shell local to me but my hopes it would be a good example went down the pan as soon as I saw it. It seemed anything sensible money was pretty rot or at best ‘recently restored’ so probably full of filler and potentially riddled with rust that’s 6 months away from showing again. Well I already have a ropey Mini shell in the garage, I don’t need another one.

Secondly the Lotus Elise. I’ve been interested in owning an Elise for years but never quite got as far as properly looking, always ending up getting other cars. But this time things are different, I’ve finally built the garage/workshop I’ve always wanted so I’m in a position to keep a nice weekend toy like an Elise in the way I’d like to.

I still have a sort of plan, in the back of my mind, to do some kind of serious long term ground up type build but I’m not exactly sure what. Top of the list though are classic Mini or an Elise/Exige/Elige and I can’t really choose an Elise to be a long term keeper/project before actually owning one. So in the absence of any decent Mini’s I started looking more seriously at Elise’s. I’ve also noticed values increasing in recent years, so I thought I’d better get into one while they are relatively sensible money.

Having convinced myself an Elise was definitely what I should get next I had a good read of owners forums, reviews in the press and buyers guides to see if there was anything specific I should be looking out for as far as faults and model variants go. I already know the Rover K series very well and an Elise has faults just as any other car but the most important thing to be aware of as far as I was concerned was the condition of the tub, particularly around the suspension pickup points. Damage or corrosion (these cars are 20 years old now and most will have seen wet roads at some point) in these areas could be pretty bad news and a problem I don’t want to have to deal with!

Top of my list was a nice S1 as, going by most accounts, they are the more focused of all the Elise’s which is really the whole point of owning one for me as it’s not something I will have to live with every day. I also much prefer the S1 Exige to the S2 Exige and if the Elise turned out to be a long term keeper then an S1 could become an S1 Elige if I felt the need one day. But I hadn’t ruled out an early S2 as they have their merits, the main one being that they are the cheapest way of getting into an Elise! As well as that they benefit from a number of improvements over the S1 partly brought about by the General Motors investment at the time of the VX220 production. Going by what others say, these refinements make the S2 a bit nicer to live with and spend time in but haven’t gone as far as to dull the focused feel of the car too much with the added weight. Later S2 cars started to get a fair bit heavier along with the introduction of a brake servo and ABS which resulted in a very noticeable difference in feel when compared to an S1. So you could argue that an early S2 is the best all round option right now but that didn’t stop me wanting an S1 a little bit more.

After looking seriously online for a while I arrived at a couple of interesting cars at Jon Seal Sportscars in Wakefield. I called Jon and was pleased to find he’s a genuine enthusiast and very helpful and friendly, unlike many car dealers out there! One of the cars was sold but he still had the other and a warehouse full of others we could check out. We figured the 5 hour drive would be worth it and my wife Jem and I went up there. We had a very informative Saturday morning talking to Jon and looking over his stock though the car I was interested in wasn’t quite what I was after.

Once we were home I started the hunt again. Given what I’d seen come and go and after talking to Jon it was clear that good, well priced cars weren’t hanging around long. The following Monday evening a car came up for sale on the SELOC forum but yet again it was 5 hours from me so there was no way I’d get to see it soon enough.

Some pictures from the advert: 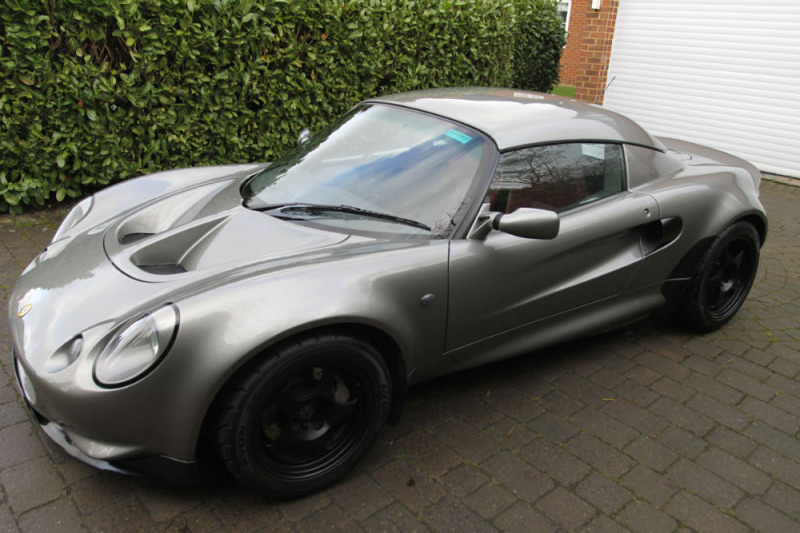 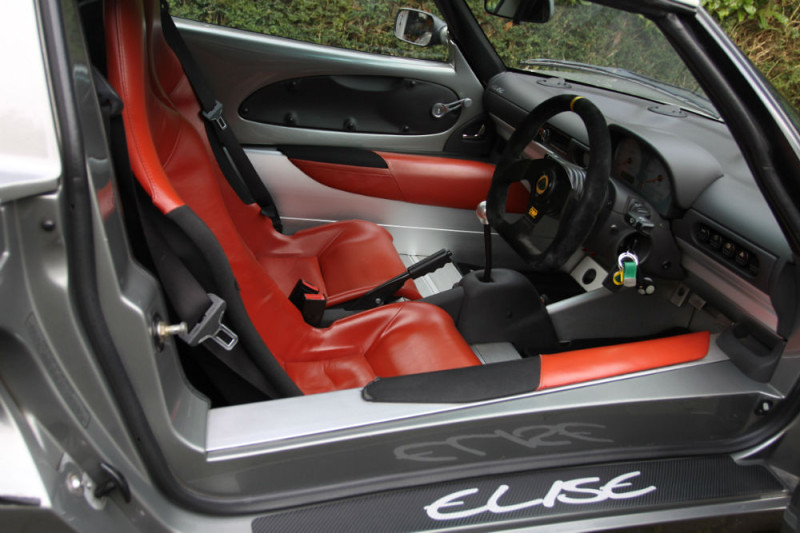 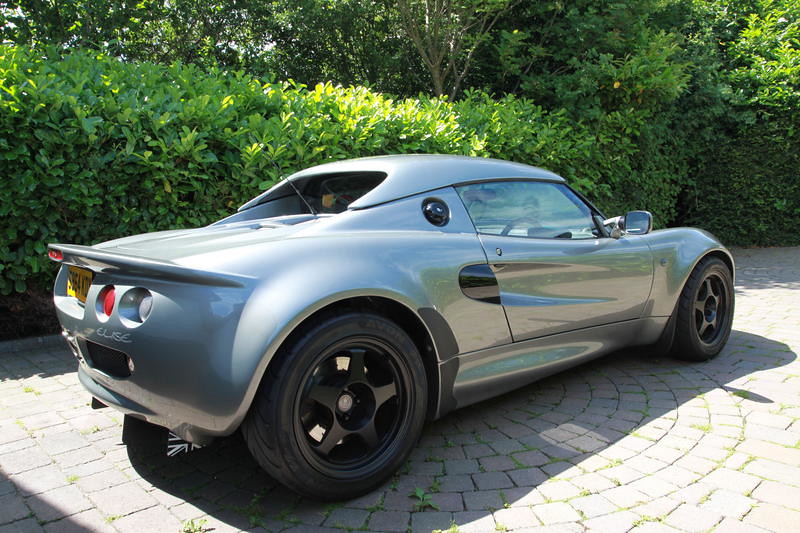 And the advert description:

After a very quick chat with Jem we decided it could be the one as it looked very tidy and already had some styling, suspension and engine upgrades that I’d want to do to any Elise I bought. I got the owner Ade’s number through the forum and gave him a call. So within a couple of hours of him posting the ad I’d made him an offer and paid a deposit on the strength of a few photos and a short phone conversation. This is certainly not something I’d normally do but I just didn’t want to miss out on the car as it’s pretty much exactly what I was after if a little above my original budget. Oh well. The last two owners are both SELOC members Adesmith and John FISH Curtis which really helped give me confidence it was a good car.

One example of how quickly good cars were going is a blue early S2 that was being advertised privately on SELOC, not too far from where we were when we visited Jon Seal. I could see it was probably a very good car for the price and would really have liked to see it but we just didn’t have time when we were up that way. The following weekend it was sold and two weeks after that it was for sale again through a used sports car dealer for £2k more. Another example is a 100k mile modified S1 for sale locally to me that I’d arranged to go see a few days after it was advertised on eBay. Before I got the chance to go see it, it had been bought by a Dutch dealer who was going to export it. So you can understand why I got a bit excited and didn’t want to delay when my Elise appeared for sale!

So having agreed a price and paid a deposit on the Monday evening, Saturday finally arrived and my brother and I drove 5 hours to Chesire in the pouring rain and met Ade. I think this picture shows pretty well how much he was looking forward to parting with the car. 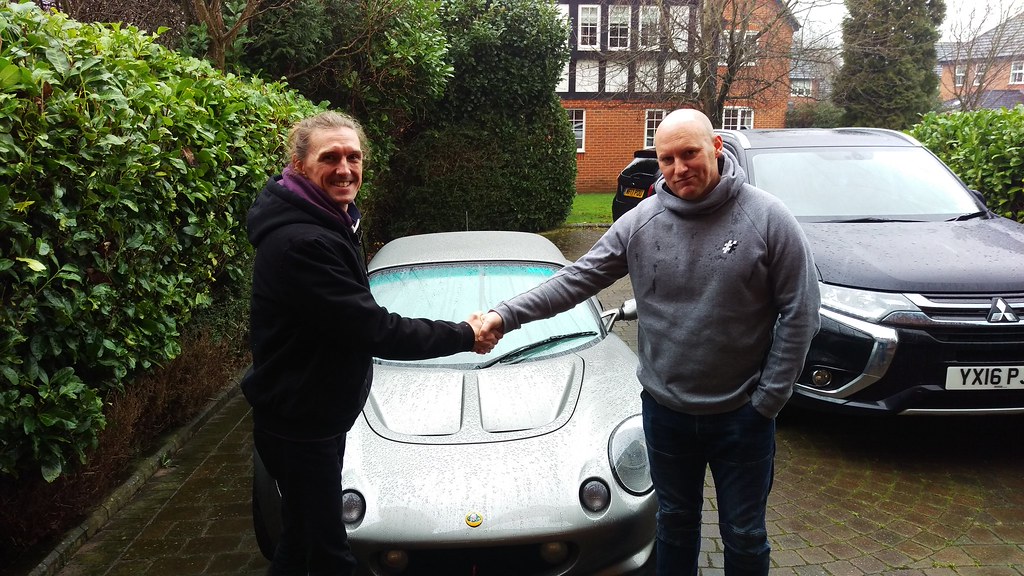 I hope Ade can take some comfort in knowing it will be very well cared for in my ownership.

Before handing over the rest of the cash I gave the car and paperwork a good look over with particular interest in the tub condition and drove it. I was happy enough so I found myself driving home in the pouring rain in an Elise on ZZR’s! I intend this to be the first and last time I drive it in the rain and I kinda wish I’d taken it home on the trailer now as it wasn’t exactly a fun drive but good to know it drove the whole way home fine and I was comfortable enough.

By the time I got home it was dark and the car was filthy so it was going to need a proper clean Sunday morning….. 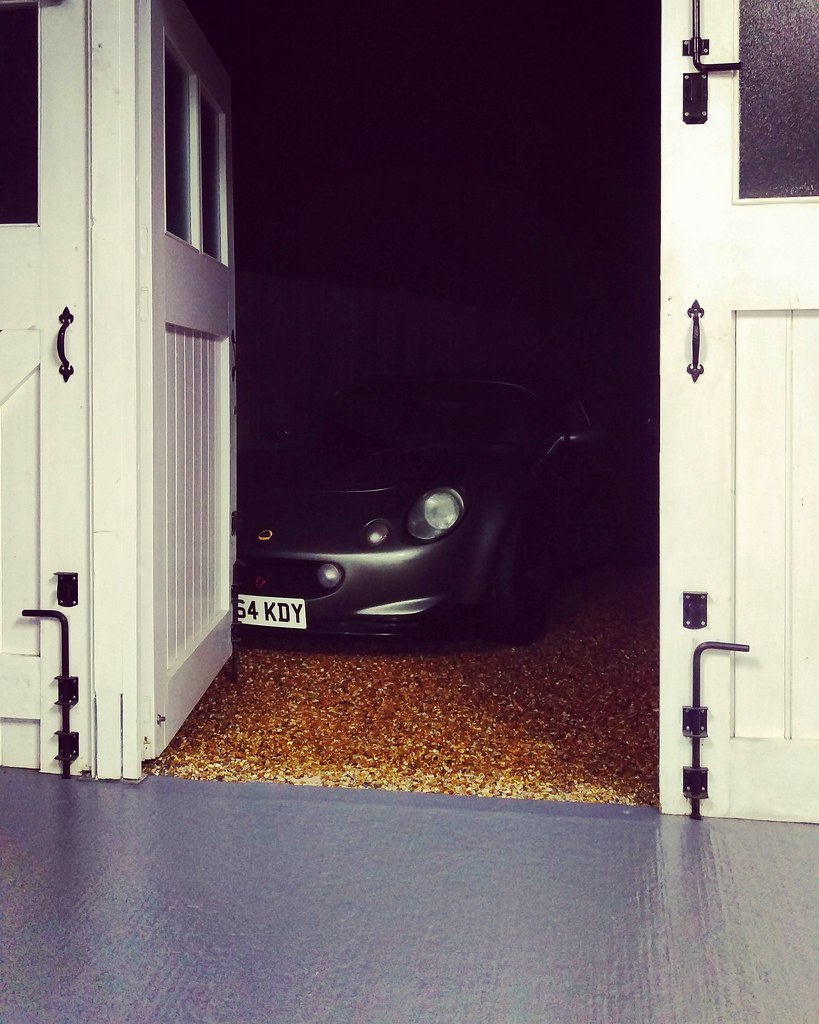 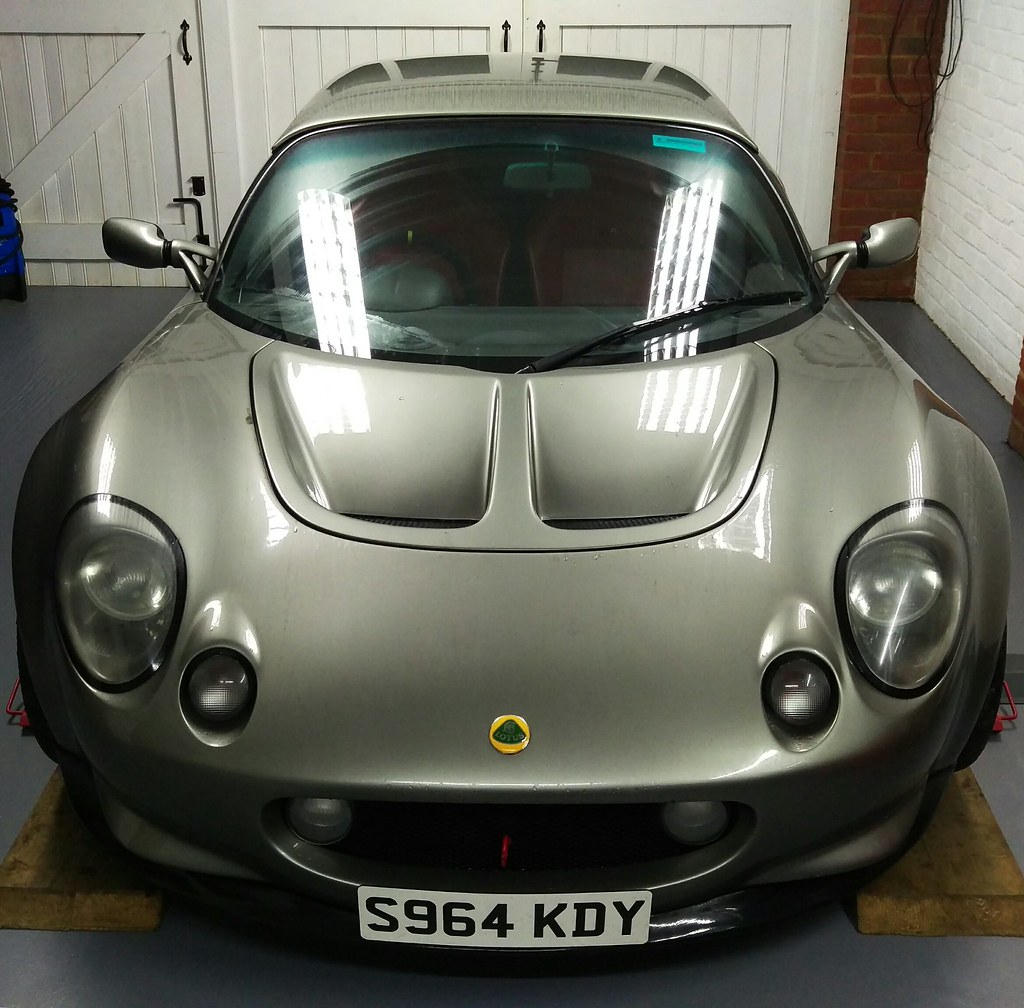 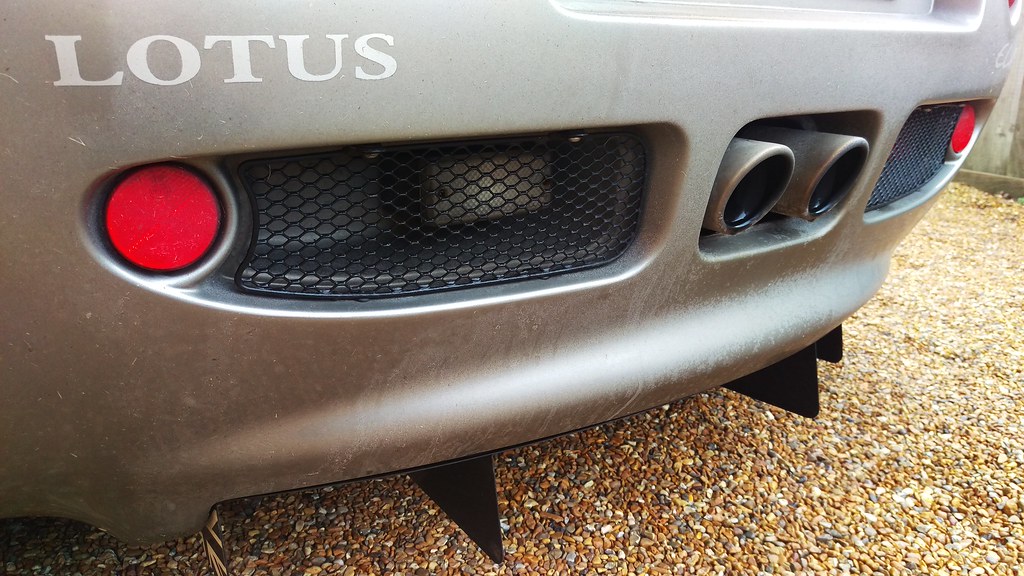 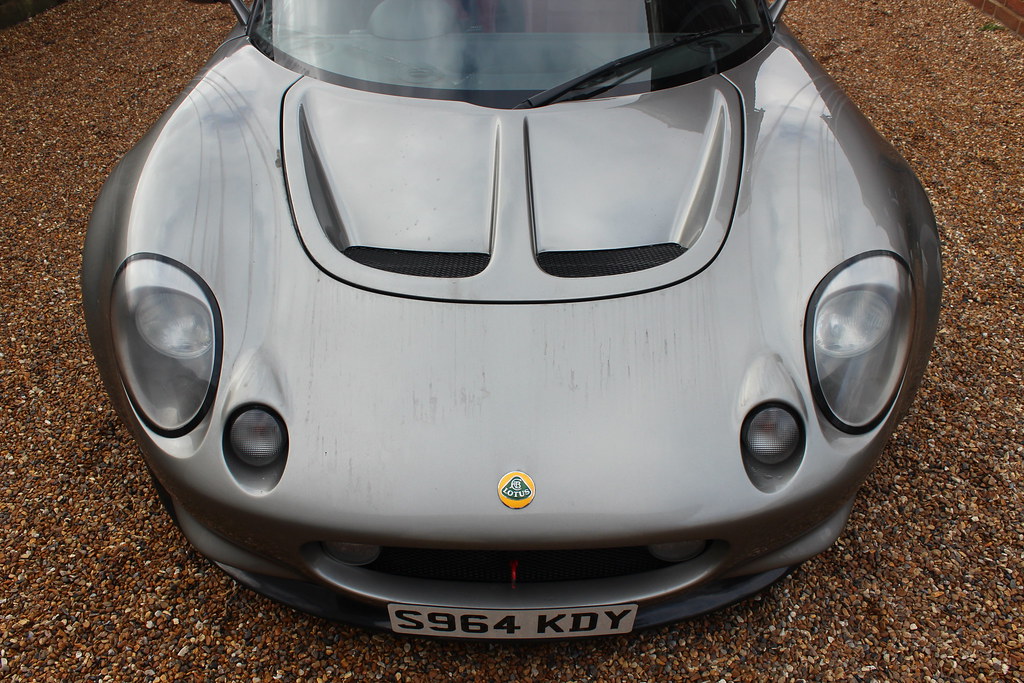 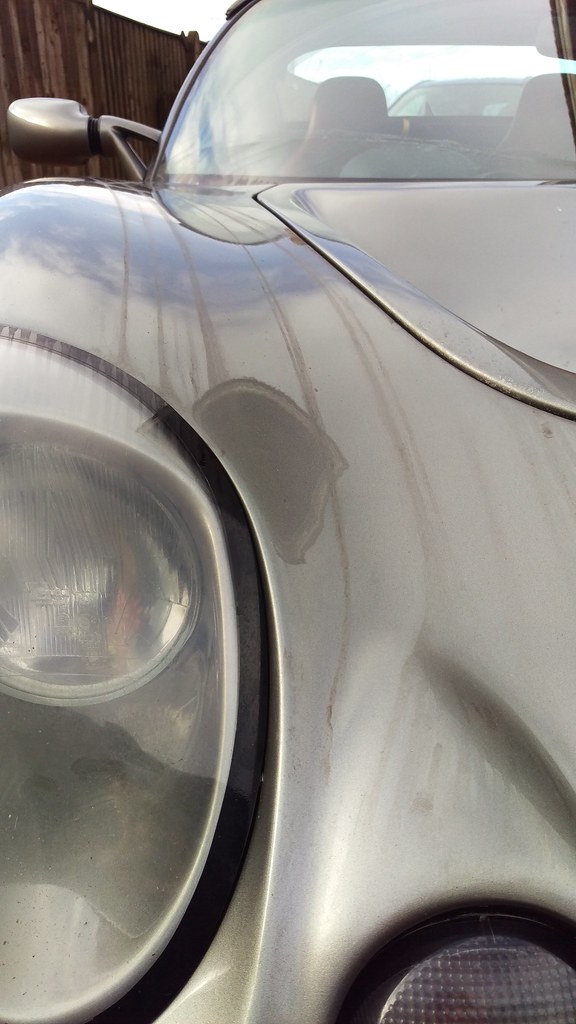 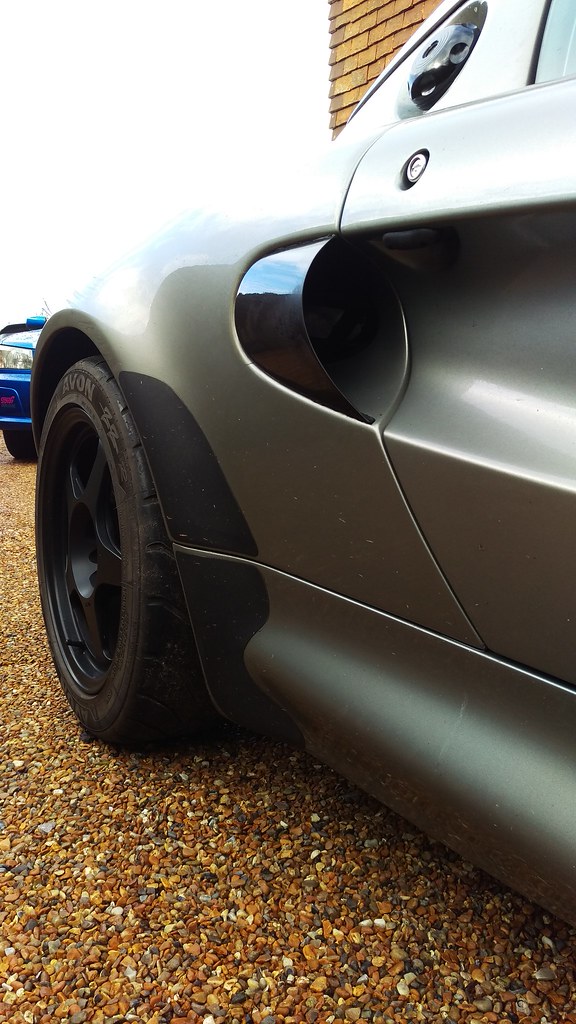 If this wasn’t an occasion to break out a new sponge I don’t know what is! 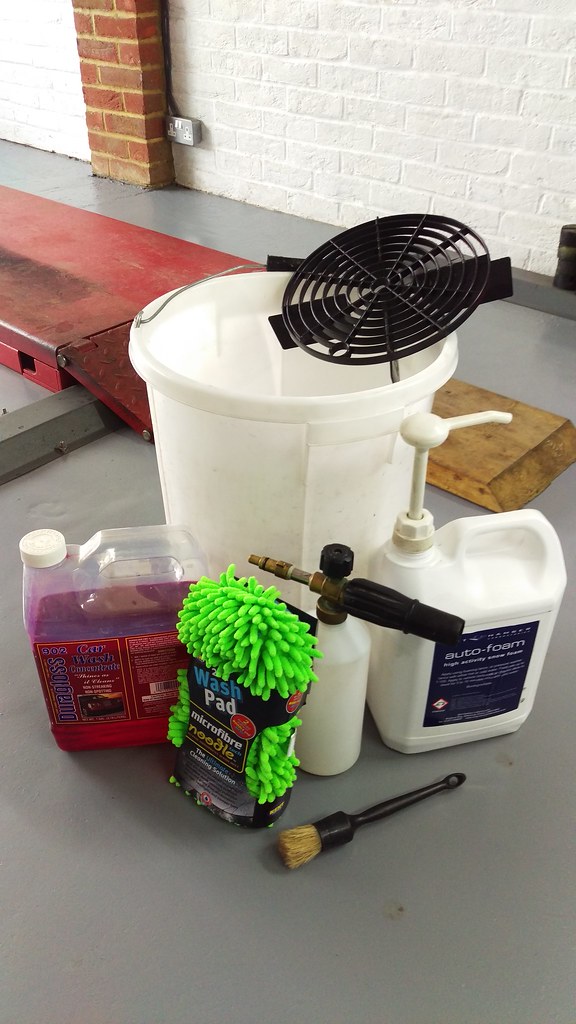 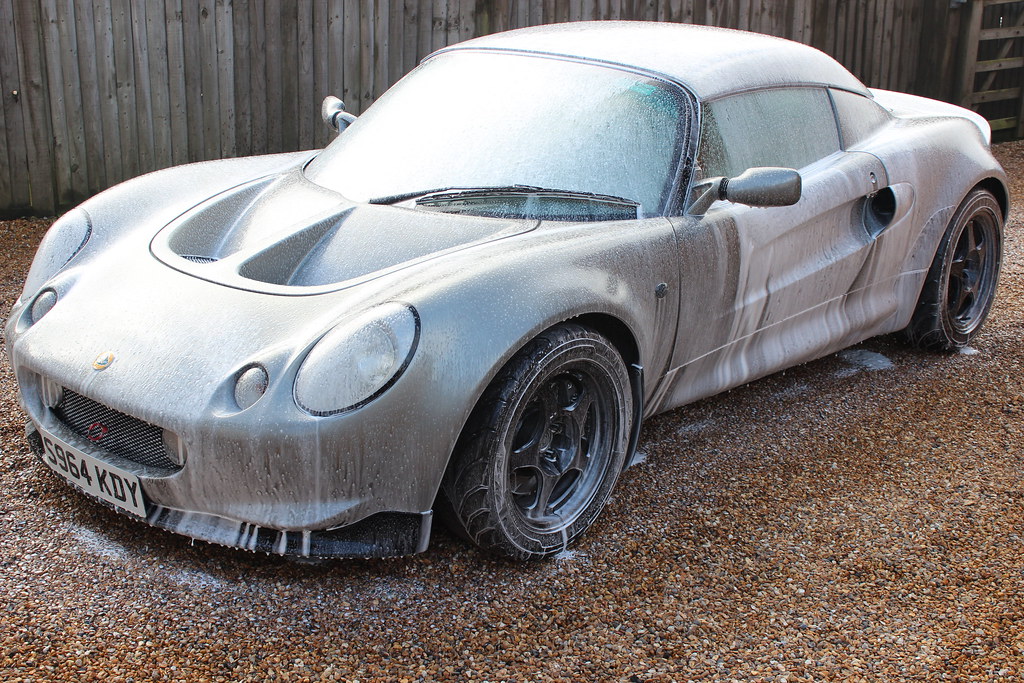 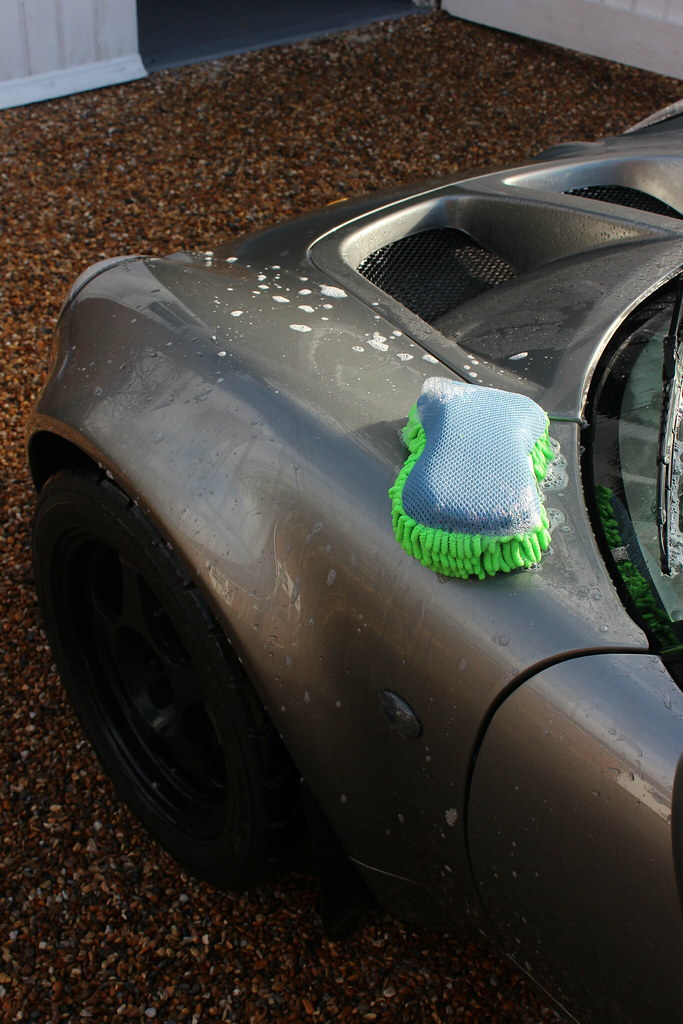 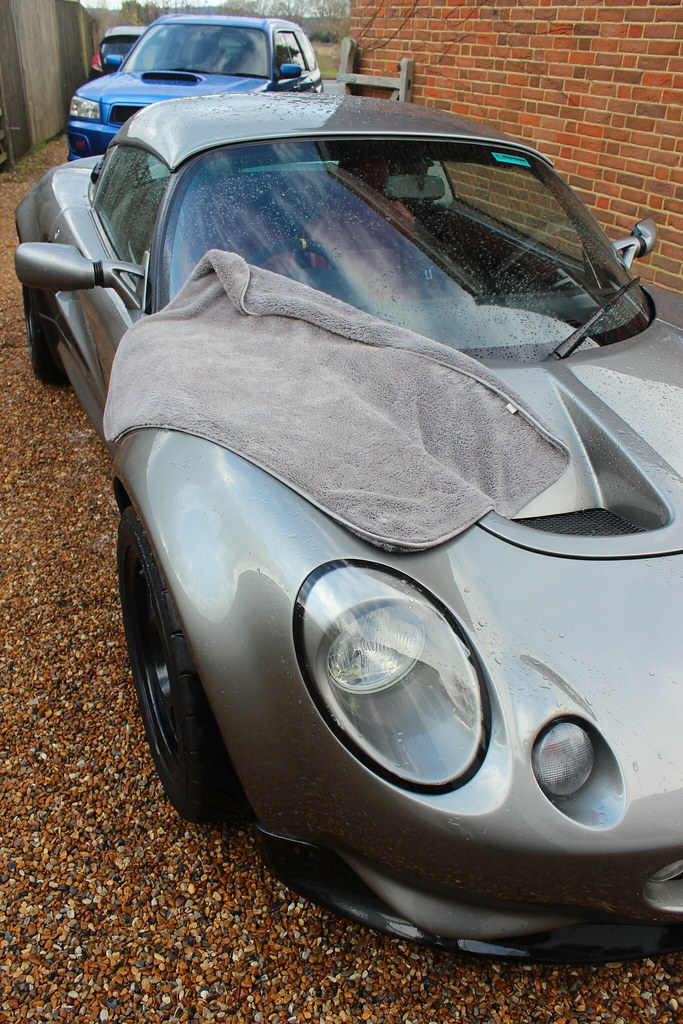 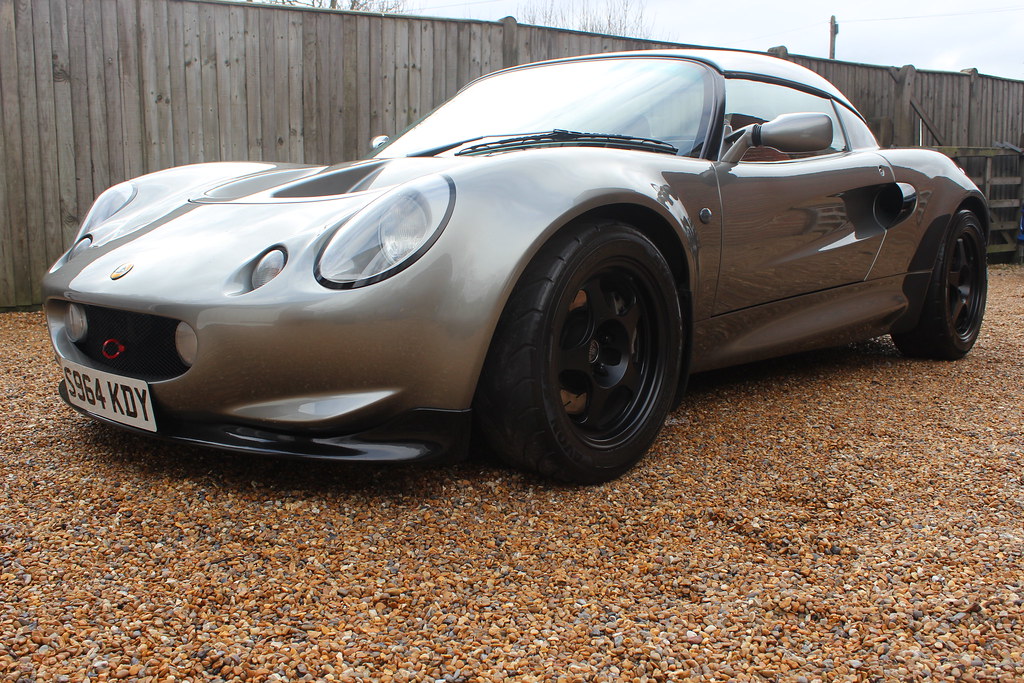 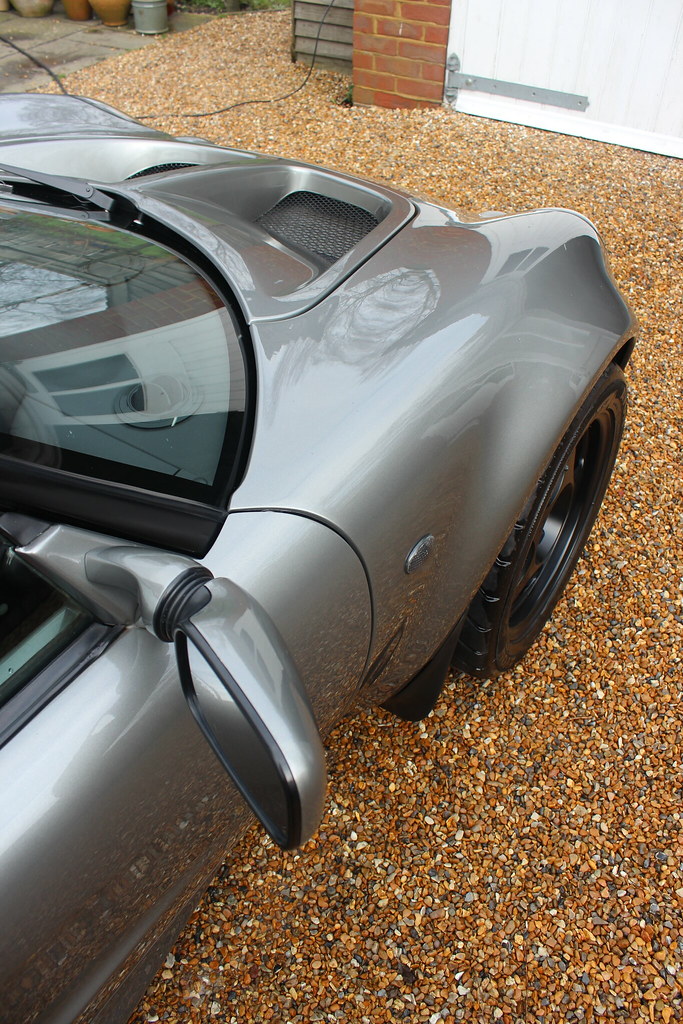 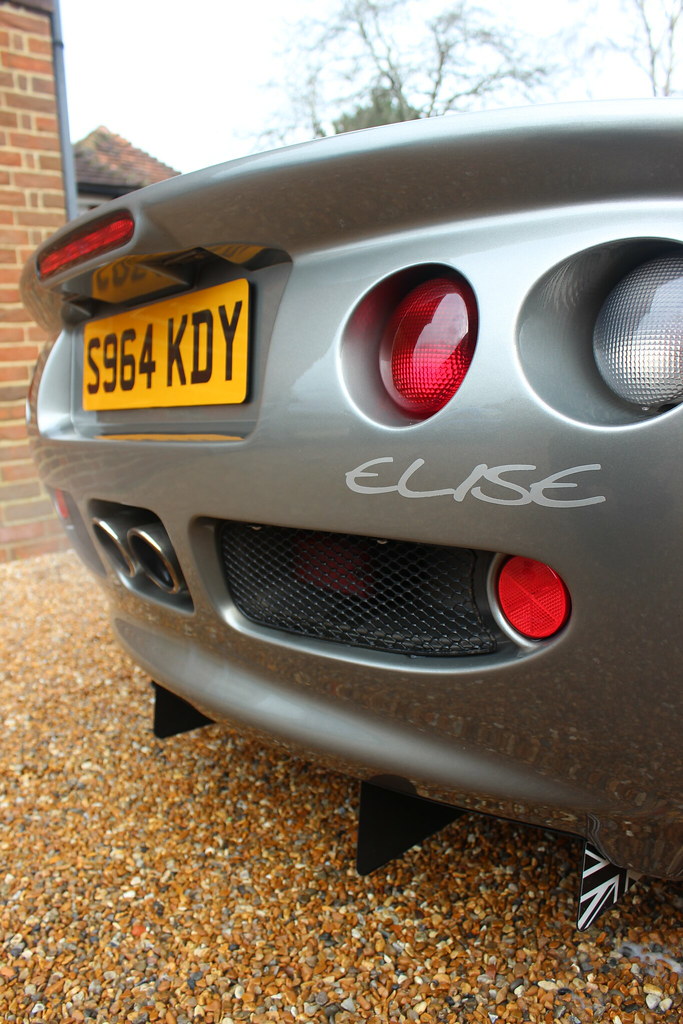 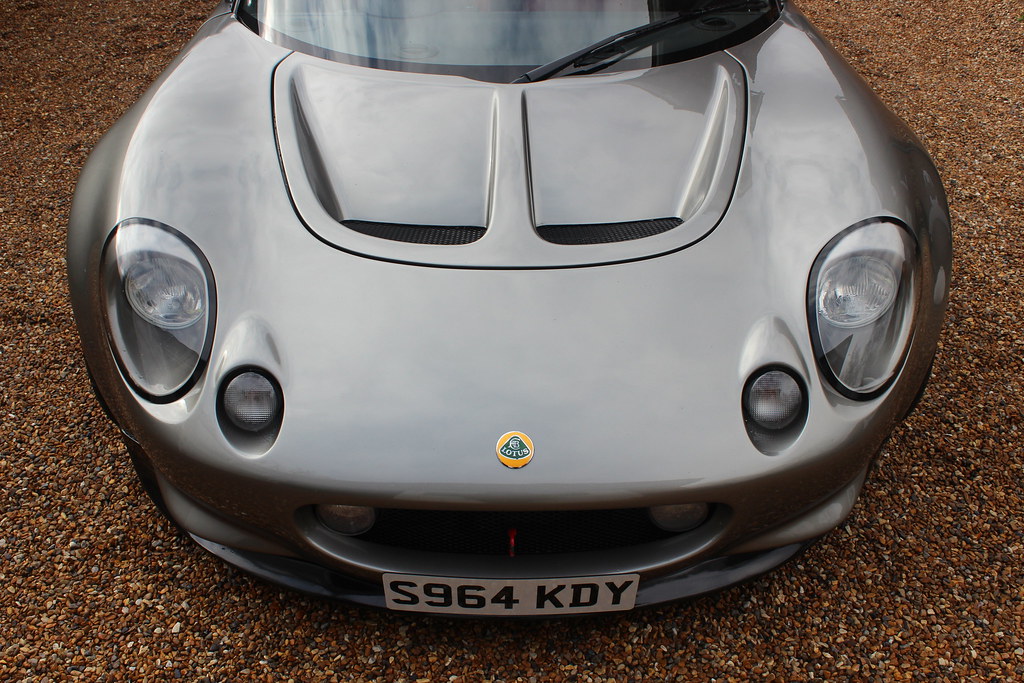 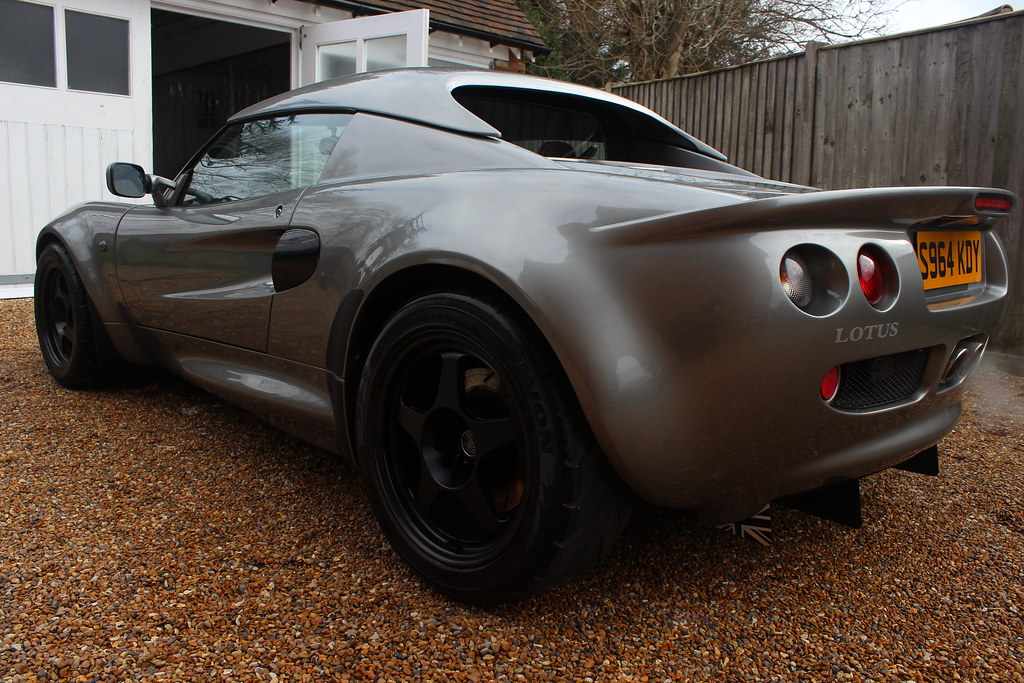 With it now clean I got it in the garage… 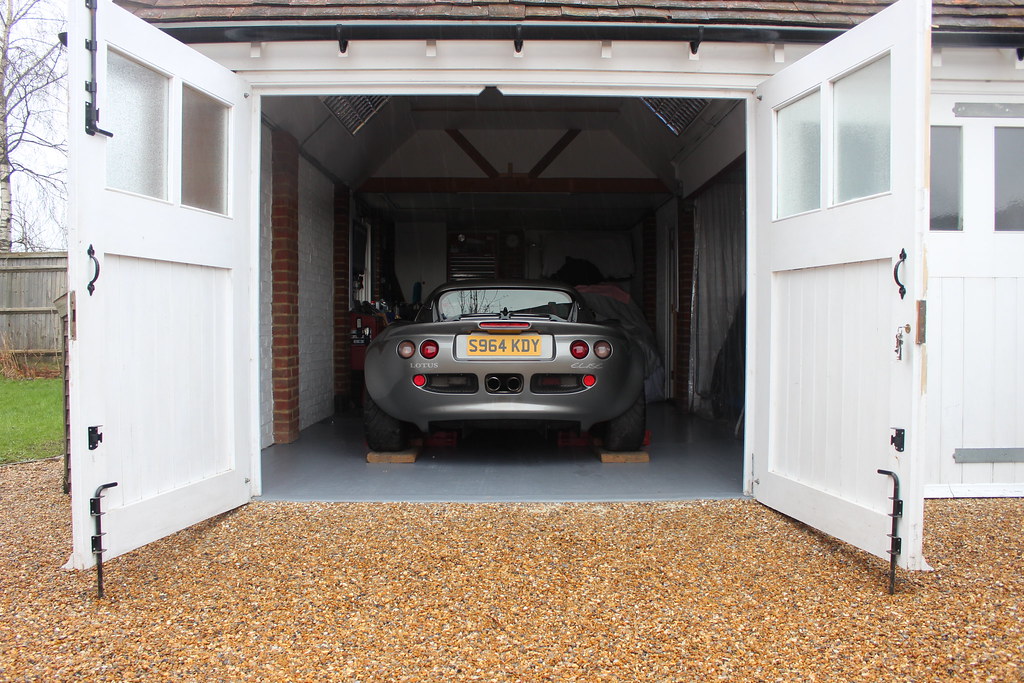 …to apply some sealant/gloss enhancer 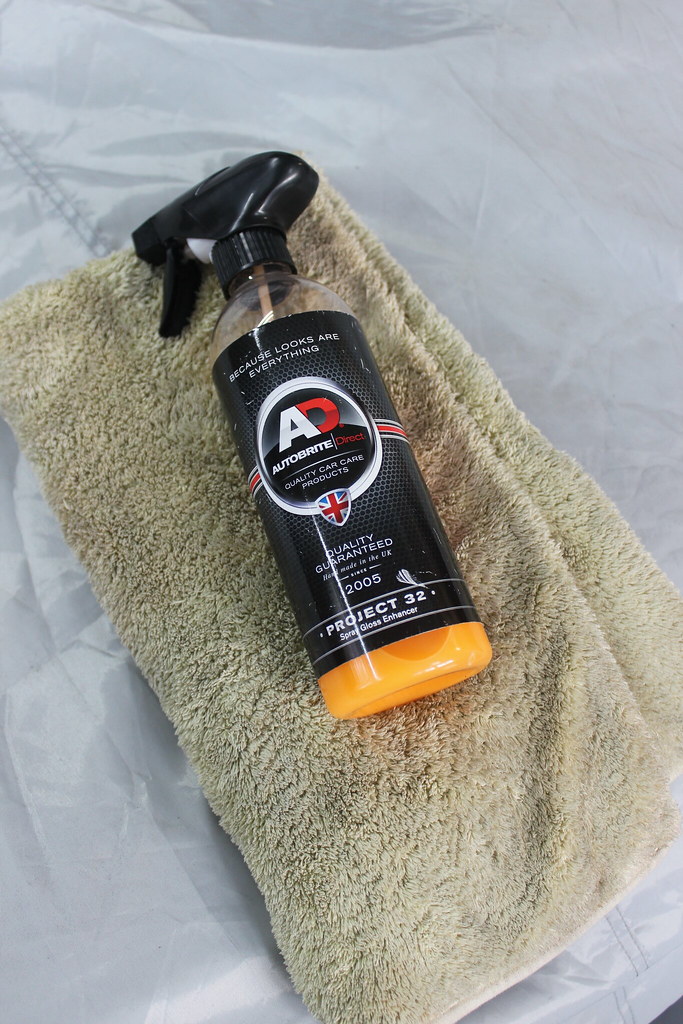 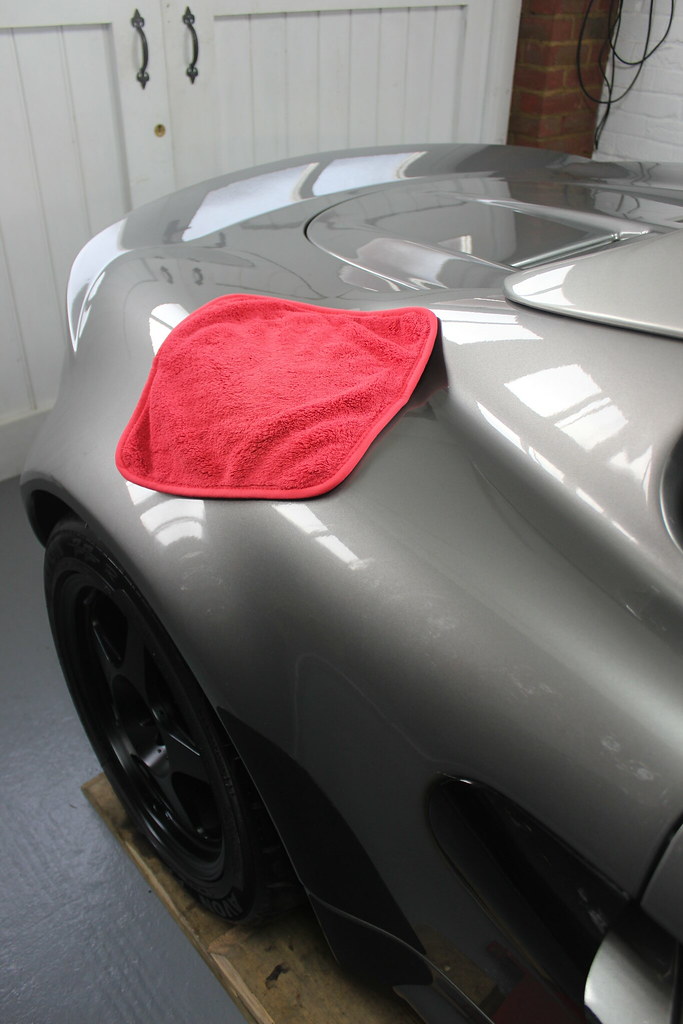 The first time I wash a new car is always a bit iffy cos it’s usually when I find all the things I didn’t notice before buying the car but I’m pleased to say I didn’t find too many faults at all (I will always find a tonne of defects on a car that nobody else has seen, it’s an affliction I’m stuck with!). The bodywork is very tidy. 😃 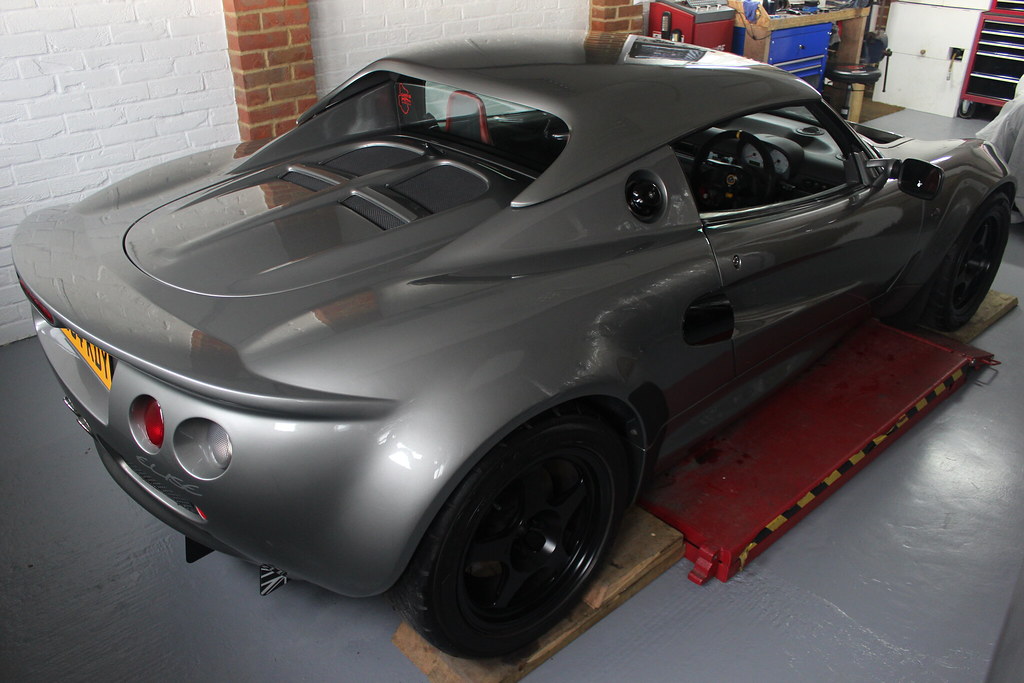 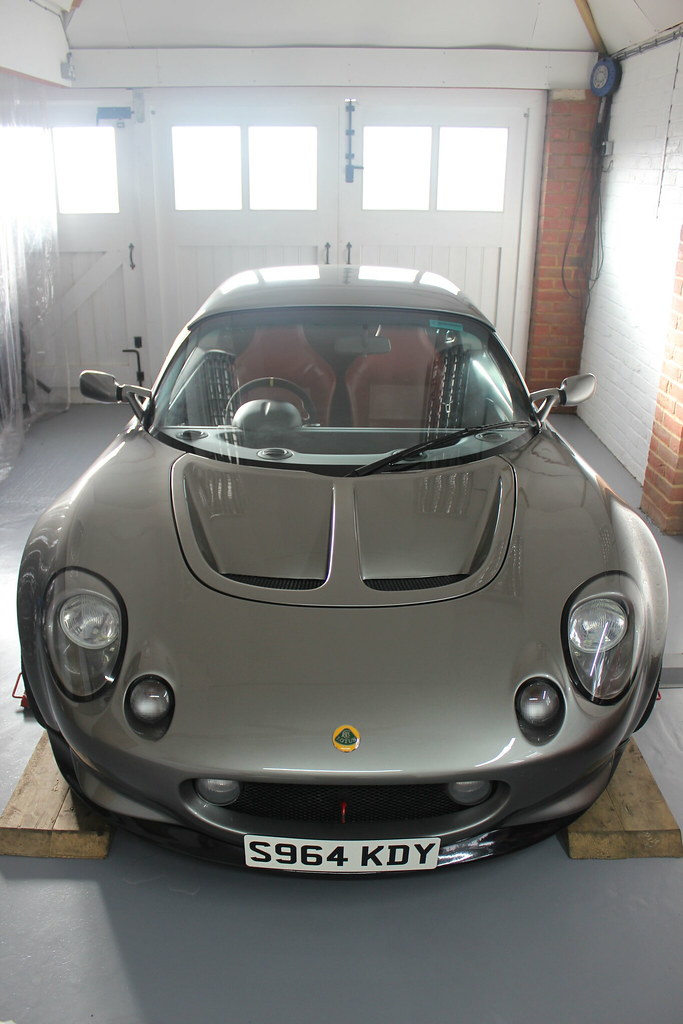 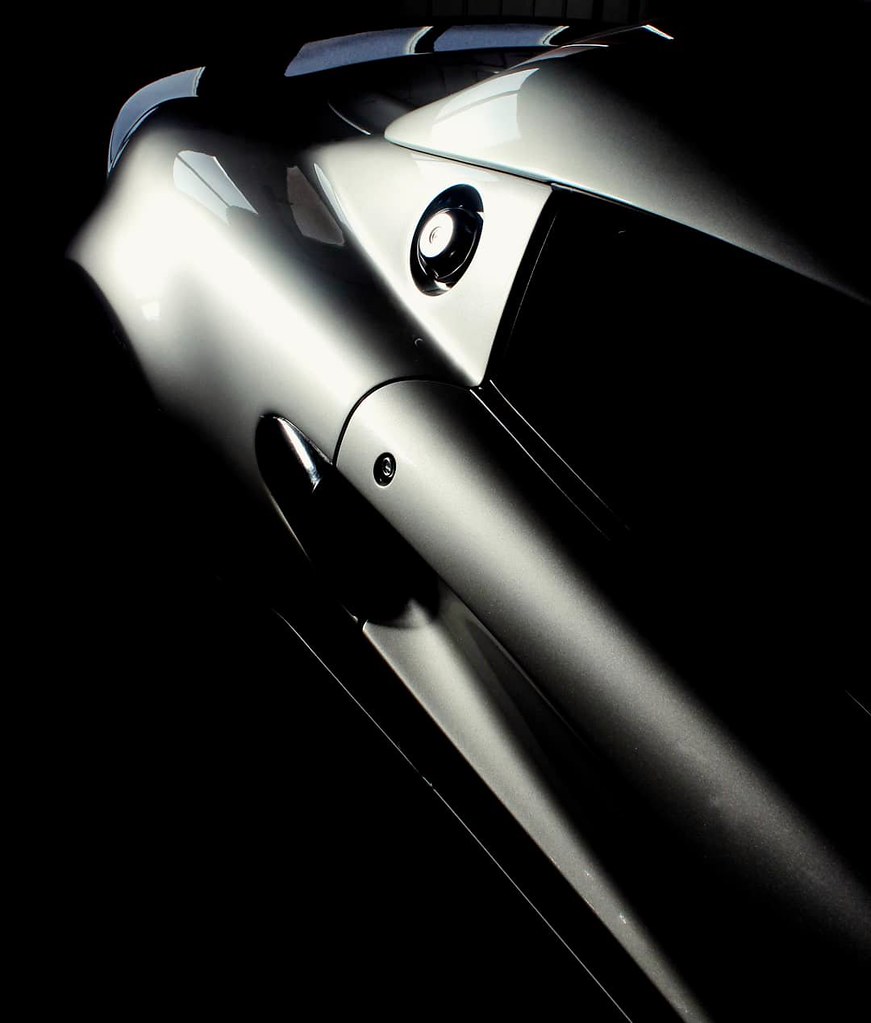 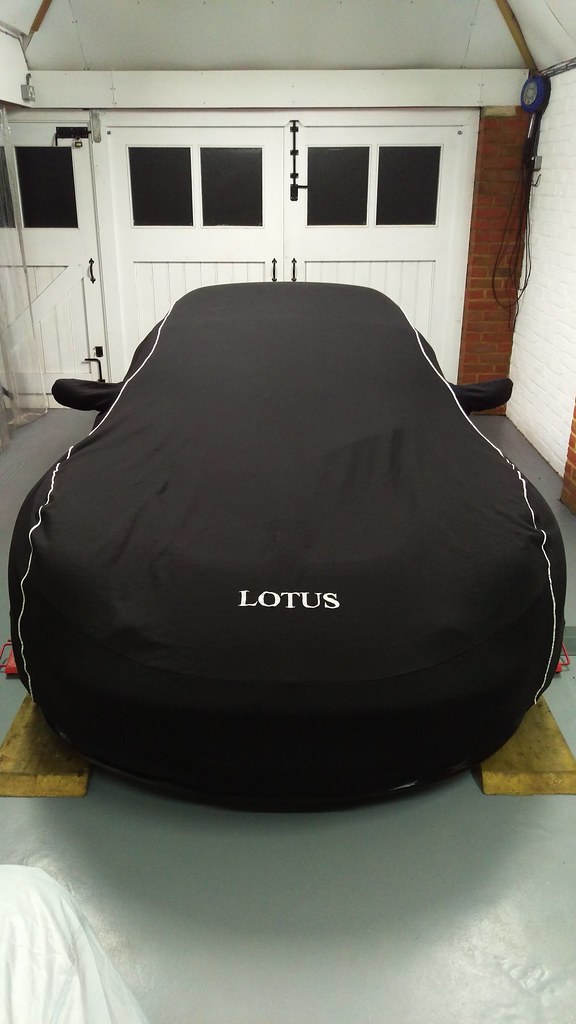 As it was January this is pretty much where it stayed for a while as the weather was almost constantly horrible other than a couple of brief occasions when I got it out for a short drive.

Well I finally own a Lotus Elise and summer needs to hurry up so I can drive it lots!

In the mean time though, while the weather was rubbish, I would have time to get it up on the lift and go over the whole car mechanically. Chances are there would be a few bits and bobs to do but hopefully not too much…..