With boost peaking at around 10psi my hope that 1.8 injectors and nearly 6bar fuel pressure with the standard ECU would provide enough fuel didn’t work out.  It was close to being ok as it drove fairly well but at WOT/full boost it would really lean out and AFR values peaking at 17 are not exactly going to improve engine reliability.

Obviously got to sort it out somehow but still don’t want to spend £500+ on a standalone as this car is meant to be cheap.

So my first thought was just replace the standard fuel pump with a high pressure, high flow alternative as it might give me adjustment, via my boost controlled FPR, to get the fuel pressure beyond 6bar (the standard pump is maxed out at 6bar).  I should be able to get one for under £100. The problems with that plan were that I don’t know if it would actually work. So I could have spent money on a pump and still be no better off. Plus if it did work I’d still be wanting to find something to control timing in the long run especially at the boost it seems to be producing.

I checked out various fuel/timing card options and piggy back ECU’s both new and used. All of the well known examples cost so much new you may as well just get an ME221.  I watched a few used piggy back Greddy, AEM etc type things come and go on ebay but they seem to often go for pretty high prices too, especially considering they are mostly pretty basic things and, depending on what you get, might only have given me fueling control and no ability to control timing. So I still kinda thought I’d be better off forking out for an ME221.

But then I found the ECU Master DET3.  Never heard of it? I hadn’t either!  I couldn’t find much info about it out there, I was hoping I’d find a useful forum post somewhere with someone describing how they’d wired it to their MX5 and how they got it running etc etc but no such luck. What I did find though was people that had used them on various engines were very complimentary about it’s abilities especially for the price.

I had a really good read through the instruction manuals and the DET3 is sort of somewhere between a piggy back and a stand alone. It can be run simply intercepting the timing and MAF signals in the usual piggy back way allowing you control over larger injectors through the OEM ECU or you can wire injectors directly to it and remove the OEM ECU fueling control all together.  That really appealed to me as I know nothing about this lark so it gives me the option to start out with the easy stuff and progress to full injector control and it’s potential headaches if I want to.

Some of the things it can do include:

The more I read about it the more impressed I was as it seems pretty versatile and it can do a lot of what a stand alone can while allowing you to retain the original idle control. The only thing that nearly put me off is the relative lack of info about it and user support.  There is an ECU Master forum but it’s not full of information and Google didn’t find much to help me with anyone out there who’d got one running on a MK1.

I thought it was worth a go though so I paid my £138 for a new one with built in 2.5bar MAP sensor and it arrived from Poland a few days later. 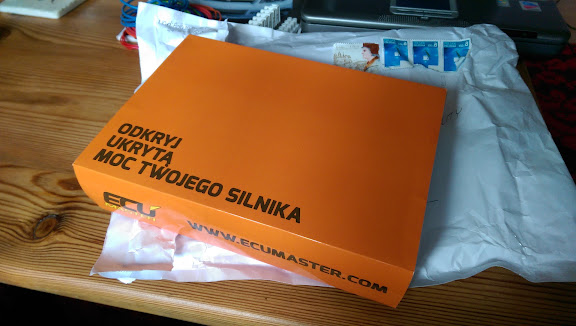 Also fetched out an old laptop hiding in the loft and installed the DET3 software. 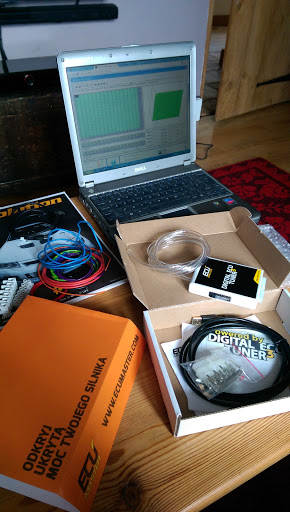