I have spent a lot of my spare time playing with cars ever since buying my first Mini and I don’t expect that will change much in the future so the whole garage extension was not only about providing a space for Jem’s Mini but also a decent workshop for me to play cars in, in comfort, whatever the weather.

I have done so much outside in all weathers grovelling around on a cold, damp floor with my nose scraping the underside of the car, getting a face full of crap, making a mess of my back and shoulders dragging myself along the floor, ending the day with aching knees and back, the complaints go on.  But I put up with it like anyone else does because the other side of it is having the satisfaction that you’ve done the work yourself, fully understanding what it is you’ve done and knowing it’s been done right. Also the money saved not paying someone else hours of labour means there’s more money for that next modification or to simply own a car I couldn’t otherwise afford.

When my dad built the garage at his previous house he had a pit dug, pretty good foresight considering I was only about 5 years old at the time. I got some good use out of that over the years as it was great being able to get under the car for some jobs but a pit is not a perfect solution and my dad has now moved house so I can’t use it anymore.

So the problem of grovelling around on the floor still remains. Though I know I’d still be doing it every weekend, I’ve had enough of grovelling around on the floor in wheel arches and under engines so if there was a chance I could fit a lift in the new garage then I was going to try and make it happen. To have a proper workshop of my own is something I’ve been hoping for and working towards for a long time. To have a lift in it did seem a bit like crazy talk though. People don’t have car lifts in their garage at home!

After convincing myself it was possible from the drawings I produced (see the plan) and having the roof built with the extra height, all I had to do was choose a lift.

Following a lot of research into the various lifts available and measuring what space I’d have to lift various cars, I decided a two post lift would take up too much space around the car and most wouldn’t fit the post heights in my roof height. Also the twin platform scissor lifts available were a lot more money so I decided on one like this:

It lifts 1.2m and would have done the job nicely. The downside being it would still be a bit of an obstruction for jobs under the center of the car.

This was definitely the lift I would buy…. until it came to buying one.  The garage build had no major costly surprises and, as we were keeping on top of materials spending throughout, we had not needed to use any of the contingency money we’d put aside just in case. So my budget for a lift could be a little better. 🙂  I had a quick look to see if anything else was worth having at a reasonable price and there was an offer price on a full height twin platform scissor lift. I checked and double checked dimensions for lifting our cars and cars I might own in the future and I agonised over the extra expense then I got bored and just bought it.  I’m so glad I did cos the lift I got was re-advertised at £1000 more the day after!

This is what I went for:

It lifts 1.8m which is obvioulsy better than lifting 1.2m. 0.6m better in fact 😀 It also gives decent access to the underside of a car for gearbox, exhaust, clutch changes etc.

This is the measurement from the Evo roof to the ceiling of the garage.  Obvioulsy I will not be able to lift the full 1.8m with the Evo but I will with the mx5 or an Elise and somewhere in between with a Mini. 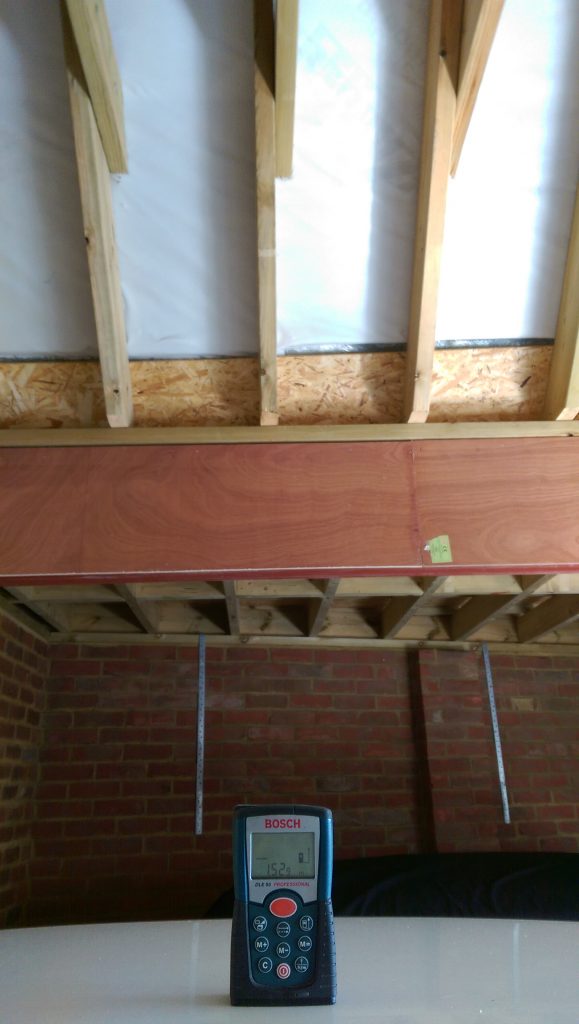 It would be a few days before it arrived and the floor would need preparing before it could be fitted…..