At the time of owning my Cooper RSP the whole Max Power thing with big sound systems, Playstations and body kits was the fashion for car modifying. I was never a fan of the silly body kits, certainly not on a Mini! But I wasn’t immune from the Max Power effect so did the whole Playstation install, sub boot build, leather seats, remote central locking, big shiny wheels, perfect fresh paintwork etc

After a couple of years ownership of my RSP though, I wanted something faster. I could have spent on making the RSP faster but engine builds were costly and if I went that route and ended up wanting to fit Weber carbs or a turbo then that would mean cutting the bulkhead which I really wouldn’t have been happy doing to the RSP. I’d already made some mods to it but I had become aware it was a fairly special model in the history of the Mini and what I’d done so far could all be reversed to put the car back to original spec’. I didn’t want to start going too far with modifying it and spoil it, detracting from it’s value so it was time to move on from the RSP.

With that decision made sometime in 2003 I removed all the sound system and put a few things on it back to original RSP spec so sell it as a very tidy, mostly standard RSP with new doors, Hi-Lo’s, Gaz dampers, s-pack wheels and s-pack arches. Then I parked it up in my Dads garage, put it up for sale and got myself a cheap car to daily drive until I found it’s replacement.

I wanted something with some more power so was looking for Minis with modified engines. I test drove quite a nice Mini that was decent inside and out and had a 90bhp 1310cc engine. It didn’t excite me enough though. I realised I wanted something more extreme, more like a race prepared Mini. Who needs a radio or a full interior, when they just slow you down? This idea was not the trend in the modified car scene at the time though, so cars like that for sale weren’t plentiful.

After some time searching, just the thing came up for sale. It was a Mini built by some Motorsport Engineering students for their final degree project. So it had been built as a race prepared car but not to the high level and cost of a Miglia spec Mini for example, more like hill climb level. It had not been MOT’d or Taxed but there was no reason it couldn’t be! It was running a modified Metro Turbo engine with forged pistons, a Safety Devices roll cage, one bucket seat, carbon dashboard, fibreglass flip front and bootlid, SPAX coilovers, rear beam axle and a foam filled race fuel cell. That’ll do nicely! Only problem was it was about 5 hours drive from me and with no MOT I wouldn’t be driving it home. A stripped out Mini with no MOT was not especially desirable at the time though so it wasn’t going anywhere in a hurry and after a few days I got a chance to drive up to to see it with my mate Ste. Somehow I managed to convince my Mum to lend me her RenaultSport Clio 172 which made the drive a bit more fun.

The Mini was being stored at a friends of the owners which we found OK. I don’t remember looking over it that closely, it had just been built after all and I wasn’t as clued up as I am now. There was a bit of private road that I could to drive it on so I gave it a little blast up and down in 1st and 2nd gears. It went well and made all the right noises very loudly. I’d never driven a turbo car before and the dump valve noise was so cool. It was exactly what I was looking for! I wanted it but had no means of getting it home. Fortunately the friend who’s house it was being stored at had a car transporter and was clearly someone who’d have no trouble arranging an MOT. So we settled on me paying the asking price which was reasonable, on the condition of it having an MOT and being delivered to me. I paid a cash deposit, drove home and waited, ages. It was weeks before it finally arrived at about 5.30am outside my Dads house which was just another thing to delight the old lady who lived across the road! 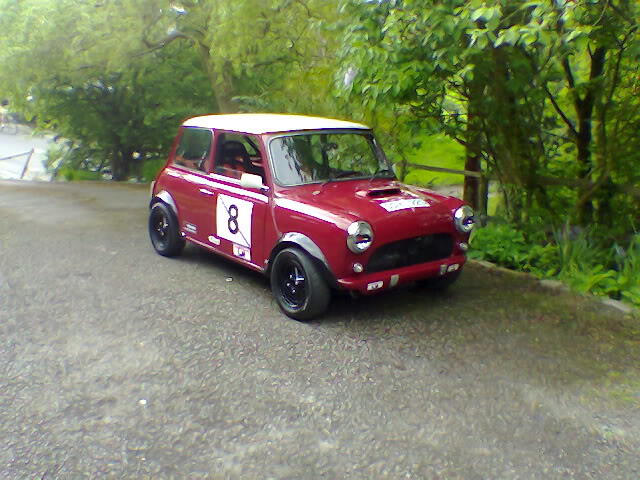 This is how it looked not long after it arrived, though I have added another seat by this point and polished it. These were taken in pretty early days of phone cameras so they’re a bit grainy by today’s standards but at least I actually have some pictures. 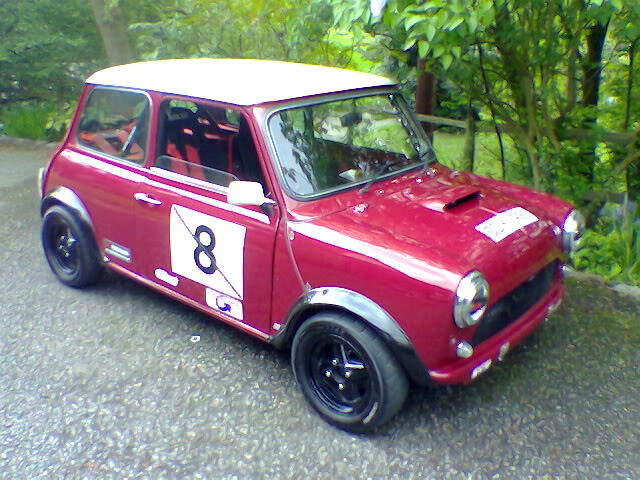 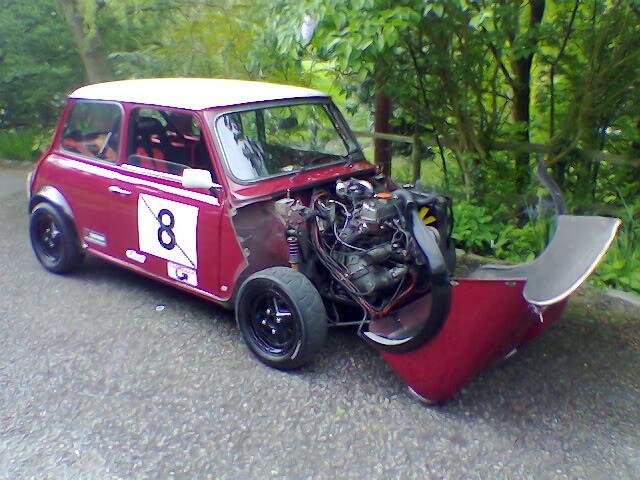 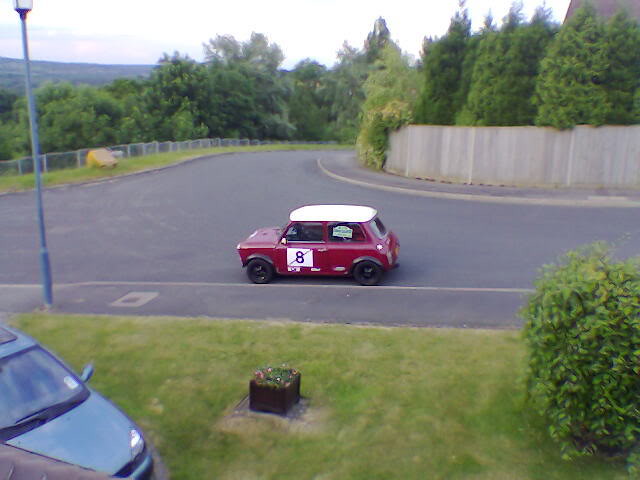 It wasn’t long before I found things to do to it. The standard MG Metro Turbo setup never came with an intercooler and though I can’t say I knew then in detail, like I do know, the reasons for having one. What I did know was one hanging out the front of a Mini would look awesome and definitely make it go faster just cos intercooler. (See the side of my Cooper RSP here, it took a little while to sell.) 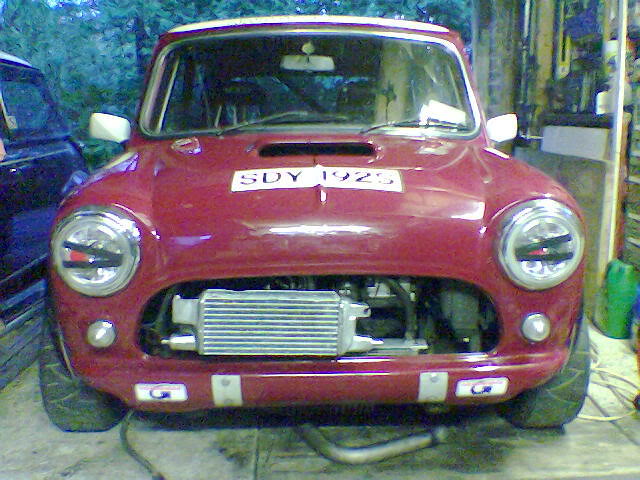 There weren’t the plentiful cheap universal eBay options available that you can find now. So as I often did then, when I wanted something but wasn’t quite sure what exactly, I went browsing in scrap yards. They used to be a great place to see what parts other cars were running that might be usable. There weren’t too many scrap petrol turbo cars then but there were a few diesel turbos, nothing I saw was quite right though. Then I happened to be at Brands Hatch one weekend and there was a guy selling various car parts including this intercooler. I think it was for a Diesel Rover and it was new. The seller only wanted about £20 for it so I bought it to try out. Here I’ve just cable tied it into place to see how it sits. 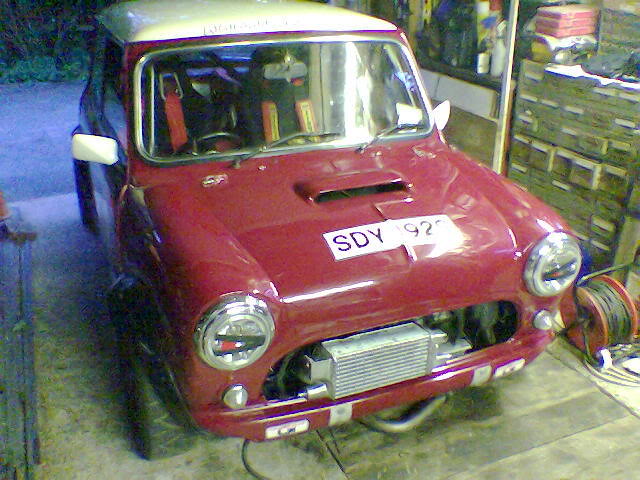 It ‘fitted’ OK so I made some mounting brackets and paid another visit to the scrap yard to find some boost hoses because they’d be much cheaper there. Quite sure I wouldn’t do this now but I didn’t have the options then that I do now and I was happy enough with it. There was certainly no doubting it was turbocharged now! 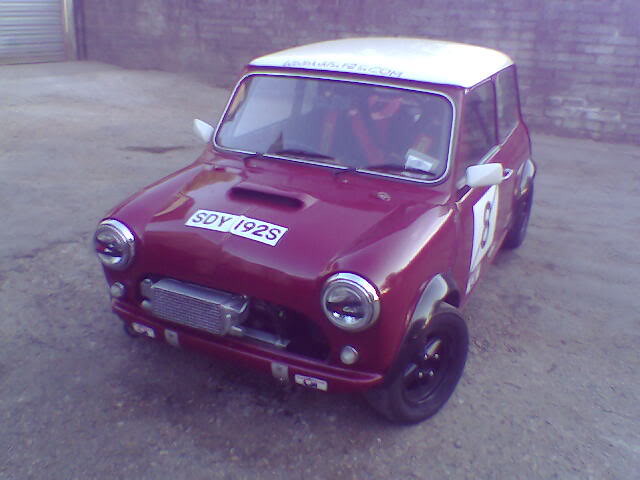 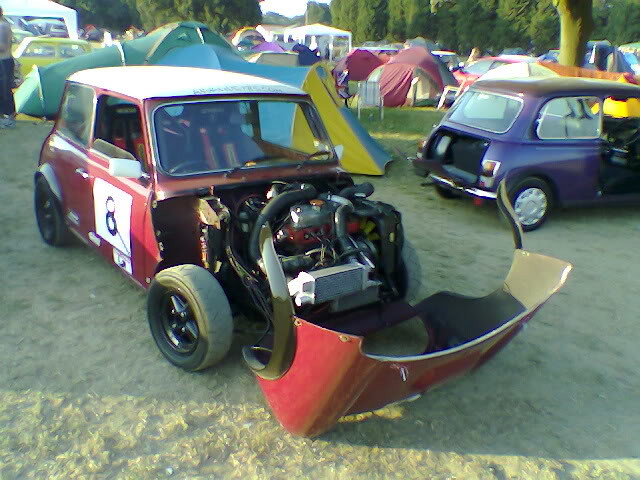 Jems Mini Equinox in the background as it started out life in her ownership. 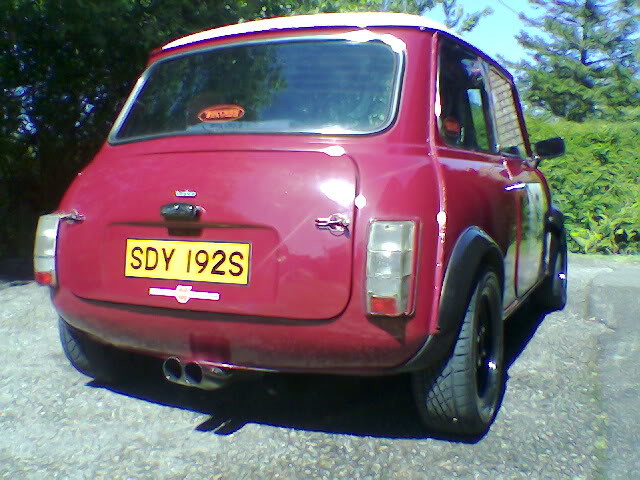 Eventually I had to change the tyres as this was my daily drive and those ‘cut slick’ style Yokohamas that came on it were really not that great on a wet road. 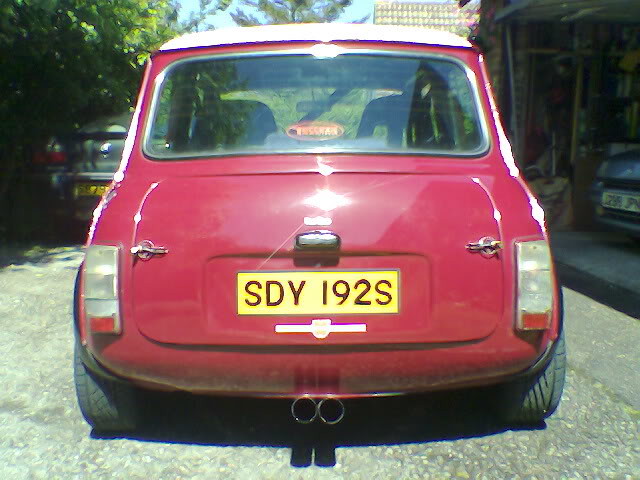 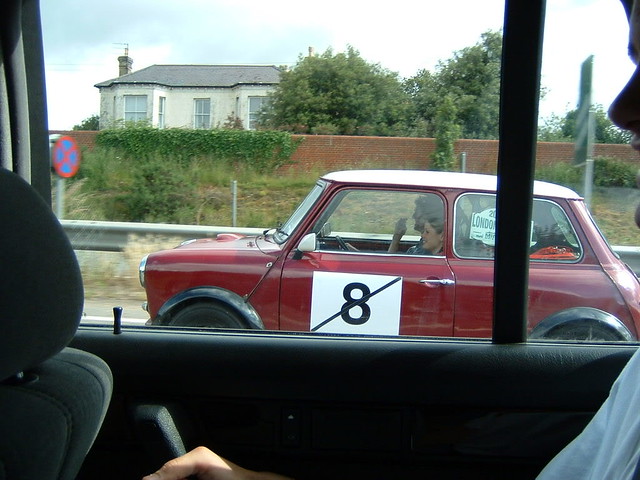 It was quite quick, certainly for the time, the dump valve was very loud and the exhaust would occasionally pop the odd flame. It was great fun and I loved daily driving it and taking it to various shows. 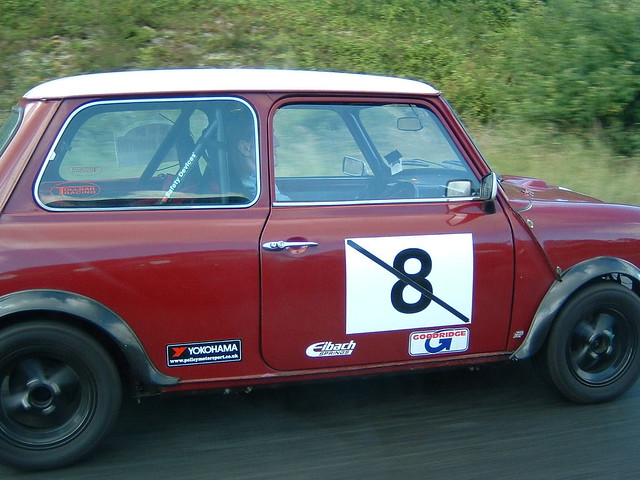 It certainly wasn’t all plain sailing though. One pretty major failure was purely of my own making and misunderstanding of turbo setups and boost control. I decided to play with the boost control valve which was conveniently placed in the dash. More boost certainly made it go faster but not for very long, in fact only for a matter of seconds, because more boost can also destroy pistons. I assume now that it could have done with the timing being retarded some more then it might have survived. I didn’t know about engine tuning then though. I guess some lessons you learn the hard way!

It also had a habit of chewing up gearboxes to the point that, after rebuilding the second gearbox, I built up another spare ready for the next failure which could happen at any time. Rebuilding gearboxes was a good thing to learn though as previously they had been just a box full of magic to me. But as I didn’t have the money to pay someone else to keep rebuilding and swapping gearboxes for me I had no choice but to fix them myself. My glamorous assistant, now wife, Jem had arrived on the scene by then too and she was very helpful as an extra pair of hands with the odd tricky bit but particularly for reading the rebuild guide in an old Haynes manual.

One time an oil cooler hose popped off just as I pulled out of a junction, then as I drove down the road it covered a tyre and brake disc in oil before the oil pressure light came on. It’s surprising how quickly oil flows through an engine or not if it’s just spraying everywhere instead! 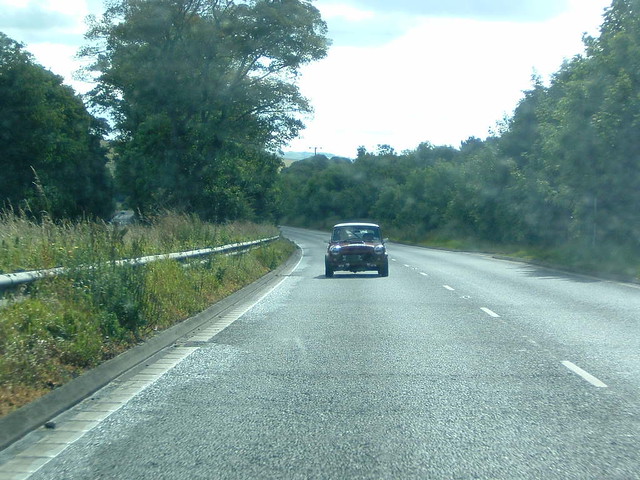 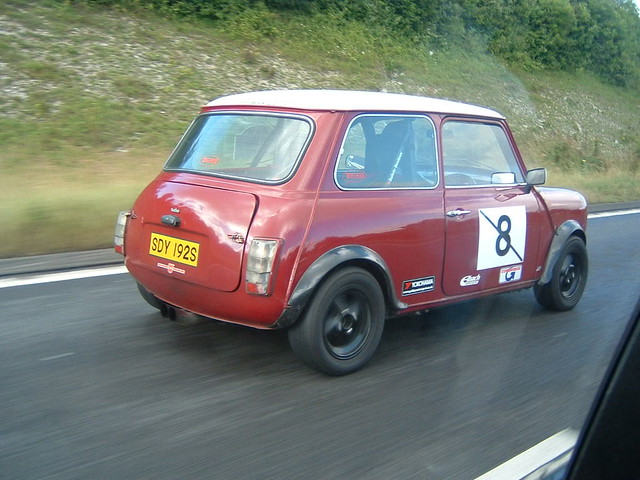 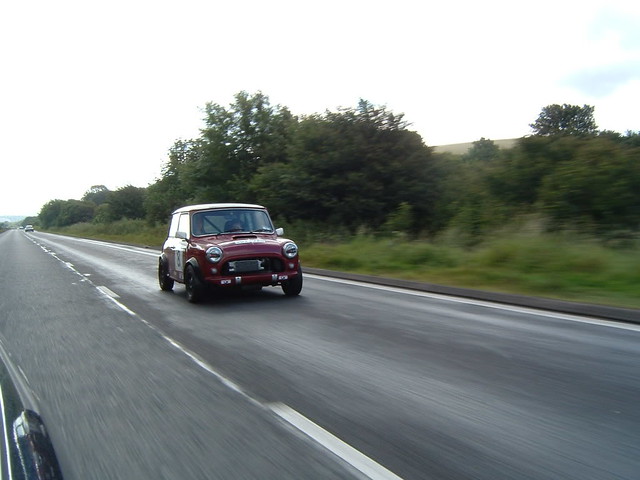 Probably the worst disaster was, when waiting in traffic at some traffic lights, an old lady in a Citroen reversed from a parking space next to me, straight at me, totally unaware I was there. I was very aware she was there but unable to do anything about it so just had to watch the Citroen heading towards me and only stop after it had caved my passenger door in!

There was no way anyone was going to match the red paint for a repair, I didn’t even know what it was. So after a lot of chasing up of the old lady’s insurer I got the car repaired at place of my choosing meaning I could take the opportunity to add to the insurance pay out and give the Mini a full respray. ‘Every cloud’ and all that.

While I was at it I got some new wheels, wing mirrors, mk1 carbon boot lid, clear coat carbon Miglia arches and bucket seats too. 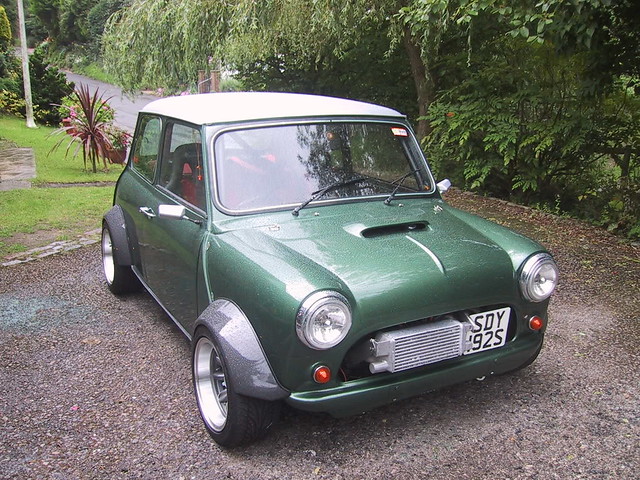 So the Turbo had quite a make over in the end. 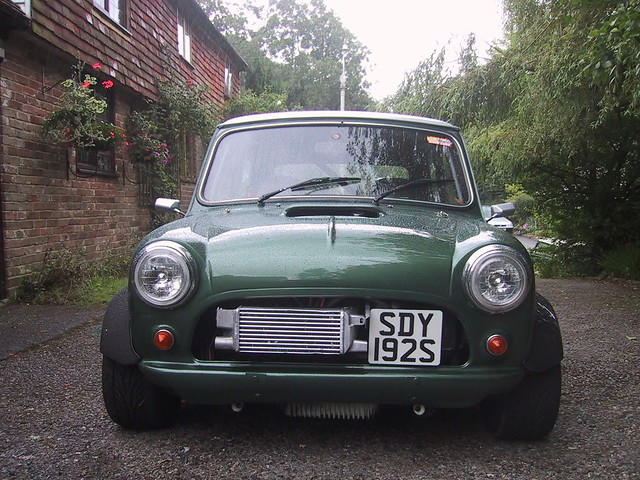 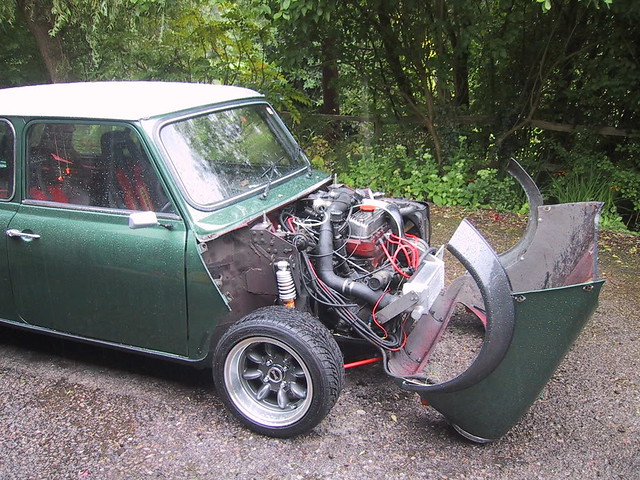 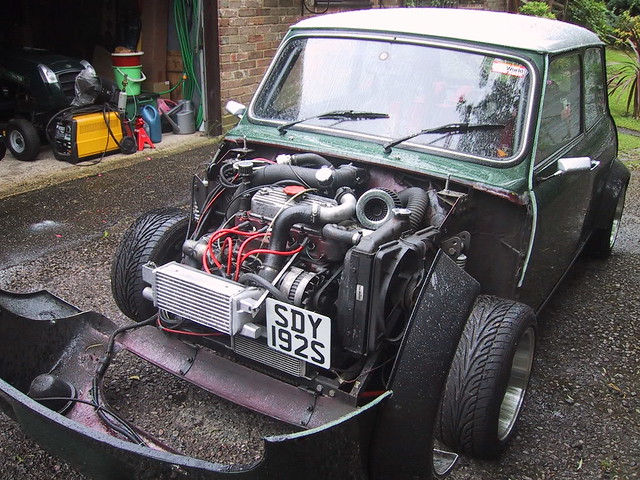 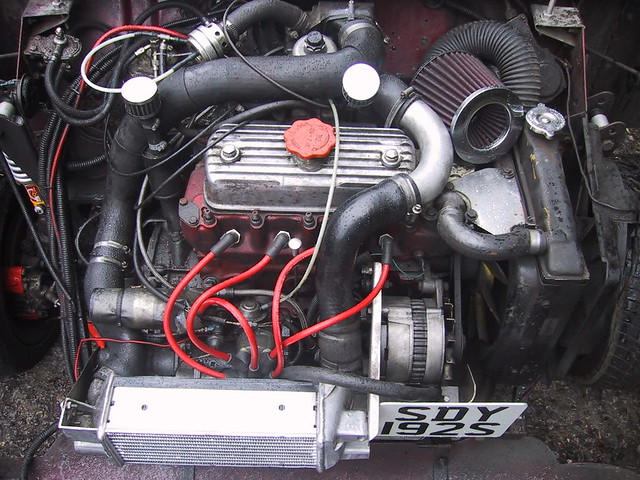 That intercooler pipework. Not nice, but it was all from scrap cars so cheap and I couldn’t just order some nice ali/stainless pipe and roll out the TIG back then. 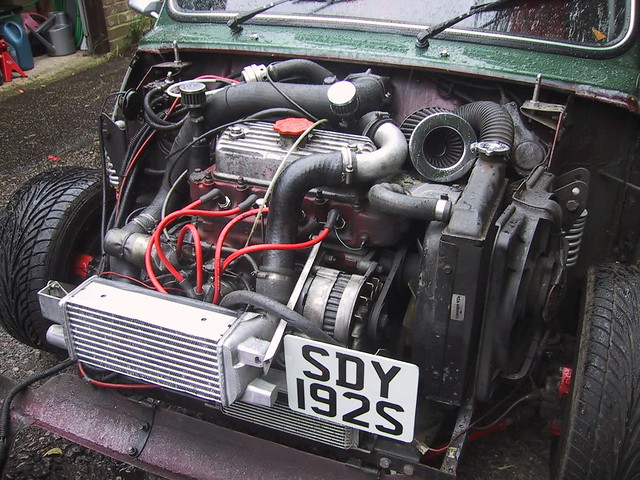 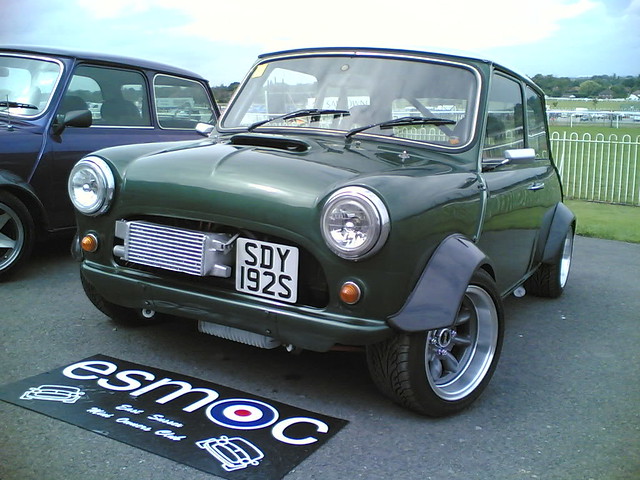 I kept taking it to shows and regularly driving it though I had got a very cheap old Rover for daily driving then. This picture must have been taken at the last show it went to in this form. This was at one of the Sandown Park Racecourse Mini World shows I think in 2006. Myself and Ste had just finished building his Mini just then and it had a show spot inside. It was the first standard length, round nose, right hand drive, B Series DOHC VTEC conversion. Built by the two of us over a couple of years of weekends.

Here we are, fairly pleased with ourselves. 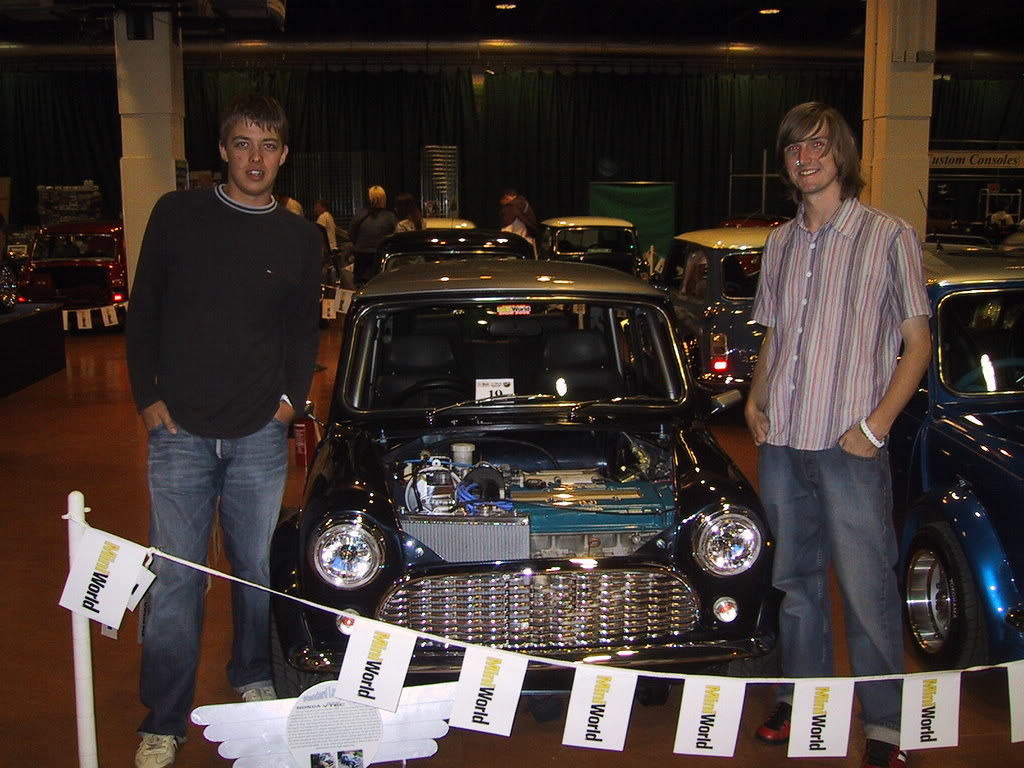 So, predictably, having done one engine swap I thought we should get stuck into another right away…