As a child all my time went on building Lego Technic models and the odd model car plus riding, falling off and fixing bikes. So my interest in cars and building them isn’t a great surprise. In my teenage years though I sort of lost interest in those things and wasn’t particularly into cars. So strangely, given my obsession with cars now, I hadn’t been counting down the days until my 17th birthday when I could start driving and get myself a car.

I did eventually start taking driving lessons at the age of 18 though and began to find my interest in cars once I started looking for one of my own. I seem to remember quite liking VW Beetles and Minis but not much else or not that could be got within my budget at least.

My interest in Minis had to be partly due to my mate Ste who started driving a bit before me and had a Mini as his first car. It was a Rover Mini ‘Flame Red’, a special edition that was sort of Cooper looks but with a 998cc engine so cheaper to insure. Ste’s was quite a nice, tidy example as far as I remember and I’d been a passenger in it plenty of times to know it was good fun bombing around in. He’d fitted a noisy exhaust and sound system plus a few other modification which all made it even more appealing.

So while I was still learning to drive I got looking for a Mini. I did not have a particularly healthy budget so it would have to be cheap! I just needed something for as cheap as possible with MOT and Tax and if I could find something in a decent colour with some nice wheels that would be a bonus.

Back then sites like eBay and Pistonheads classifieds existed but not as we know them now, the very slow dial up connection being one of the main hindrances to them being particularly useful. The most common way to advertise a car was through the classifieds printed in local papers, Auto Trader or the Friday-Ad etc. So no hi-res pictures of cars all over the country to easily compare what was out there at different values. All you got was a few words with basic information and a phone number. You just had to call the seller/dealer, ask a few questions, decide if it was worth travelling for, then go take a look at it. The best bet for finding something cheap and local was the Friday-Ad and it was free so for weeks I’d try and get hold of a Friday-Ad as soon as possible, usually on the Thursday night when they got dropped outside various local shops. That way I’d hopefully get to see what was for sale and call any sellers nice and early to arrange a viewing.

My Dad and I ended up looking at a few rusty Minis. Then one came up for sale about 30 mins drive from home so we went to take a look. It was pretty rusty just as all the others had been but at my budget I was kinda stuck with that reality. The redeeming feature of this one was that it was a ‘Flame Red’ model so just like Ste’s with the look of a Cooper having a white roof (this one had the addition of a Union Flag decal too), minilite wheels and a decent interior but with the 998cc engine. It was up for £550 or £600 maybe, either way we settled on £500 and I left a deposit then picked it up a few days later. Yay! I had my first car and it was a cool one if a little (a lot) rusty. Just had to actually pass my driving test now.

After three attempts, yes three, I finally passed my practical driving test. I had driven my Mini a fair bit with L plates so I was fairly well acquainted with it but now I could finally bin the L plates and go anywhere, any time and not have to get a lift into work anymore.

Despite not having much previous interest in cars or any mechanical knowledge or ability, now I had a car of my own, it was just a given that I would maintain, modify and fix it myself. Both because I wanted to and out of necessity I guess as I didn’t really have the cash to be paying someone else to do any work that I could probably do myself. My dad has never really been the kind of guy who paid someone else to do something he could do himself and he was pretty clued up on working on cars so that must have been a big part of why I did the same.

There was a list of faults with my Mini but also a list of modifications I wanted to make to it so fixing any faults like the rust or the fact it would jump out of 2nd gear all the time could wait. Any spare cash I had would almost always go on the Mini and I started my spending on a ‘Stage One Tuning Kit’ from Mini Sport. This was a complete exhaust system with LCB, inlet manifold, air filter and a new carb needle. I doubt it made much difference to the power that little 998cc engine made but it made it sound faster and that’s just as important!

Some of the faults I probably should have dealt with were the lack of tread depth on the rear tyres and mismatched rear dampers as maybe what happened fairly early on in my ownership might not have. As is often part of first car ownership I had a little mishap. I was going round a corner I’d been round plenty of times before on a damp road and lost the rear end, went across the other side of the road and hit a big kerb. Obviously, this had nothing to do with the speed I entered the corner or the loud music or my total lack of ability! The kerb was just low enough to miss the shell but the front subframe and one wheel hit it hard which bent the suspension mounting points. Everything was still attached though and fortunately I wasn’t far from home so my Dad came to the rescue and drove the Mini back to his garage with the front wheels pointing in very different directions.

Now I really had no choice but to get stuck into a proper job and learn as I went along, I certainly wasn’t going to be calling the insurance company to make a claim as insurance premiums were bad enough as it was!

As the subframe was in a pretty bad way and the gearbox had the preexisting fault of popping out of 2nd gear. We decide the best option was to buy a complete engine, gearbox and subframe from a scrap car and swap the whole lot. Scrap Minis were plentiful then so what I needed was easy to find and inexpensive. If I remember correctly we paid a visit to one of the local scrap yards and got them to remove everything from a Mini they had and deliver it. This only took a few days and in the mean time I could get on with dismantling my Mini. There weren’t a million different Youtube or website guides on how to do it back then. All I had was the Haynes manual, my Dads experience, my mate Ste’s help and the confidence of ignorance!

I could have lifted the engine and gearbox out then dropped the subframe down off the shell. But as I was going to replace the whole lot, we thought we’d disconnect everything attaching the engine, gearbox and subframe to the shell. Then lift the front of the shell up and roll it back on the rear wheels leaving the engine, gearbox and subframe behind. Well that wasn’t quite as easy as we’d thought it might be. Lifting the shell high enough by hand, to get it over the top of the engine, and hold it there while rolling it backwards felt a bit sketchy but we did manage it, the proof. 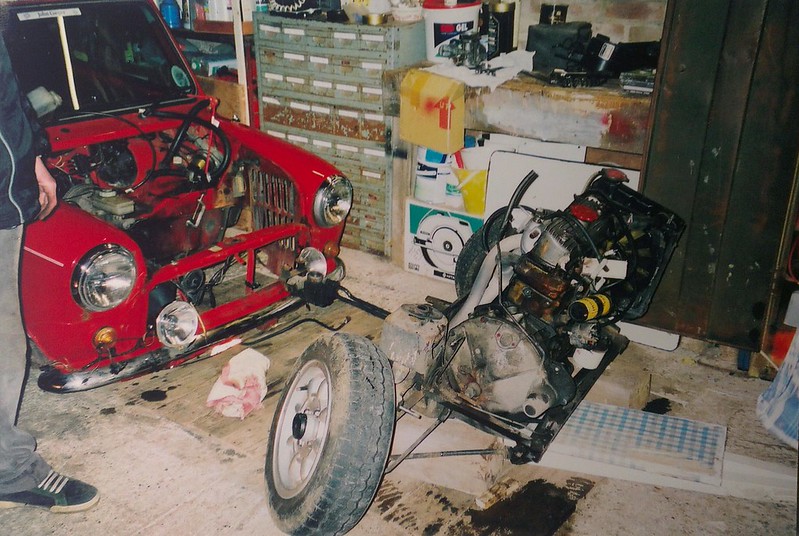 The only pictures I have of my first Mini. This was a bit before the digital revolution so they’re just some old film camera pictures we must have decided to take after the struggle of getting that shell up and over the engine. 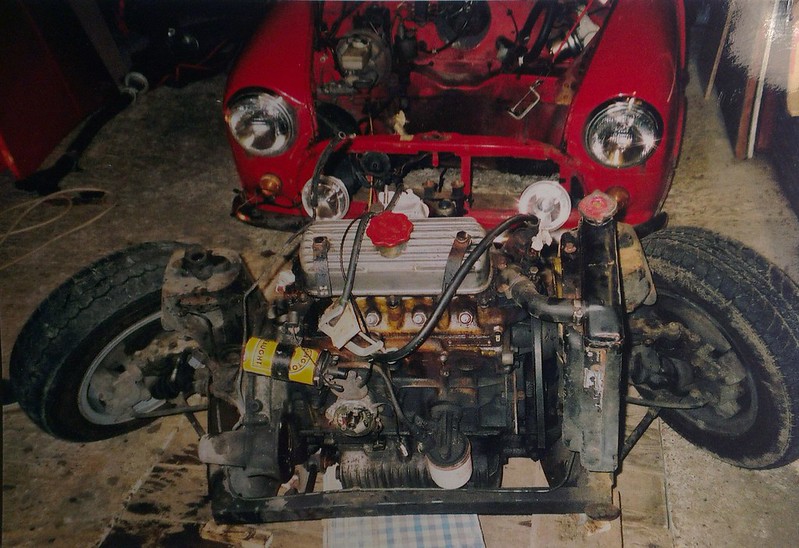 Me and my Dad… 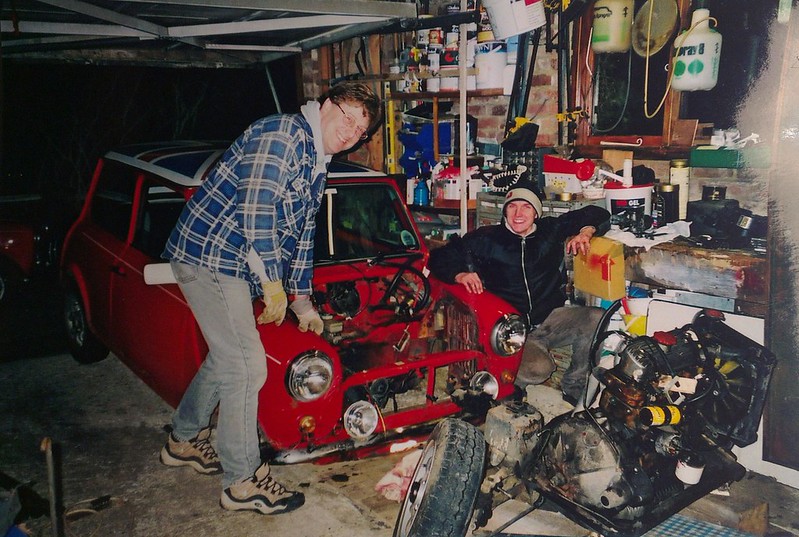 …and Ste in this one. 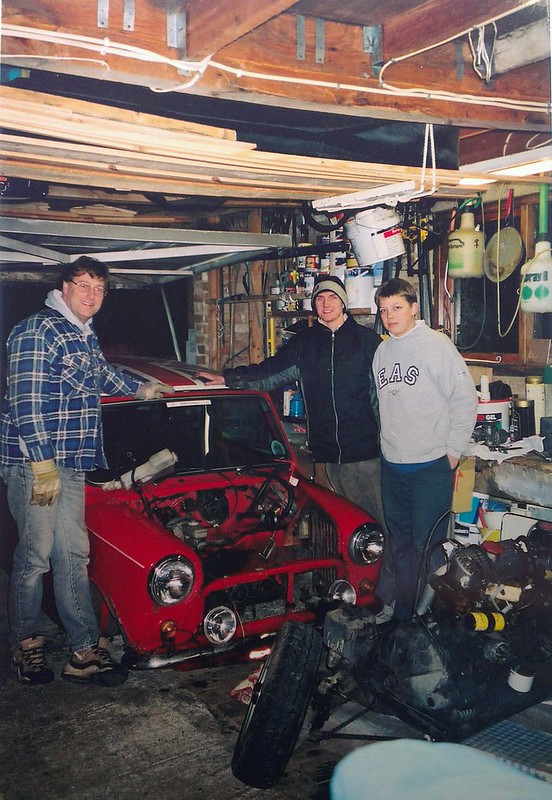 I still have that hat!

I spent the next few days building up the new subframe, engine and gearbox very slowly as I didn’t really know what I was doing but I was learning. Most importantly I was learning that I was pretty good at this lark and I didn’t find it a chore or boring at all. I actually really enjoyed it.

From this point I guess things just never stopped, I’ve always owned at least one Mini ever since. I’ve owned a bunch of other cars too, all of which I’ve maintained, modified and crashed myself.

The best thing about my first car though is probably that it helped me find the thing I’m good at and love doing. Up until then I had mostly wasted my time in further education having done A-Levels after leaving school. But they just felt like a continuation of school which I hated, particularly the having to do as I was told part! So I’d ended up working as a shelf filler in Sainsbury’s which was ok for a bit as it meant I had some money but it wasn’t long before I realised I couldn’t be doing that for the rest of time! My early days of playing with cars with friends is what helped me discover engineering and want to learn more about it. At the time Ste was studying electronic engineering and my mate Liam, also a Mini owner, was studying mechanical engineering. So I enrolled in the same course he was doing and the rest is history.

Now I’m employed as a Technical Engineer as what I do is a kind of mix of science and mechanical engineering but there’s really not much difference between the playing with cars I choose to do for fun and what I’m employed to do with lasers, telescopes, gravimeters etc. I problem solve, fault find, design, build, machine, weld, fabricate, fix and maintain all sorts and get paid for it. Best of all I enjoy it!