Almost forgot.  I fitted some 1.8 injectors. I actually fitted these a while ago and used the car naturally aspirated for a couple of weeks so I could be sure they were working fine with no missfires and that the ecu was able to compensate and keep the mixture stoich when in closed loop at idle and small throttle opening.  They worked fine for idle and cruising but, as expected, over fueled the rest of the time.  At WOT/open loop the wideband would read around 12 with the 1.6 injectors and read around 10 with the 1.8 injectors.  The main thing I was interested in at that point was the fact the ECU could make them work in closed loop running so I knew it should be possible when the charger was on though this was all still at standard fuel pressure.

blue 1.6 ones out with the rail 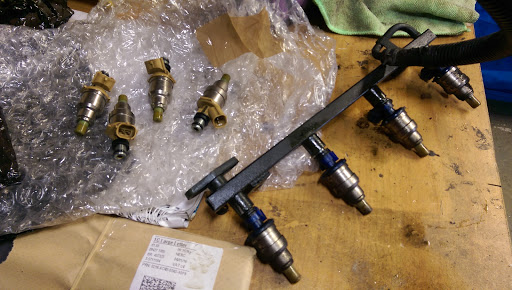 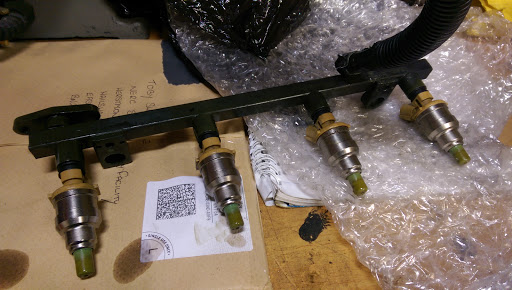 all back together and running ok 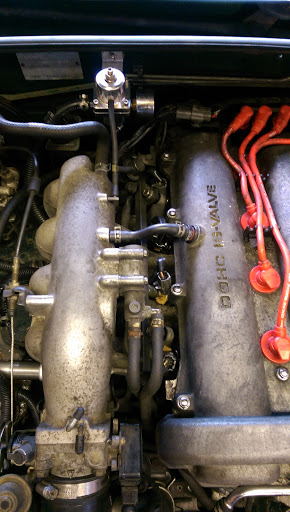 Some info taken from my thread on MX5nutz on twin throttle body balancing:

Some great packaging there. Impressive you didn’t have to cut the front panel!

When you come to setting your throttle bodies you need the pre charger one slightly more open than the stock position one. if you have it too far open you can hear a horrible sucking noise. You want to set the pre sc tb just slightly back from when it starts making that noise and adjust the stop on the tb to hold the closed position at that point. If you use the stop your tbs will stay balanced and not go out of adjustment, even as your new throttle cable beds in. It saved me a load of hassle!

Cheers yeah really trying to avoid doing anything drastic to the bodywork for now so glad I could get everything to fit as it is.

Cheers for the info on TB balancing, I can see it’s a tricky thing to get right. I’ve had the car running and noticed if the pre charger tb is not open enough the intercooler hoses collapse so to start with I just made sure it was open enough to prevent that but that has pretty much put the stop screw at it’s max adjustment for holding the TB open.

After having it running I found this with a bit of searching:

This is what worked for me pretty much set up first time – Skuzzle’s (Nick’s) advice:

Start by closing idle screw completely. Then hold pre charger throttle fully open and adjust idle at post charger screw until rock steady where you want it.
Then close pre charger fully (make sure idle screw is fully closed on this tb). adjust the grub screw stop in the pre charger tb until charger becomes just audible (read bearable).
Then adjust throttle cables to take up slack, but not to have any hold on either throttles when off the throttle.
Go for a drive.
repeat above until 100% happy.

The grub screw needs quite small adjustments.. half a turn can be the difference between nice and loud.

Sounds similar to what you’re saying with backing the pre charger TB just off where it gets noisy.

It must be equally important to get the post charger TB set right too. Thing I’m not sure about is when he says “…adjust idle at post charger screw until rock steady”   Is that the idle adjustment screw or the grub screw stop?

I was also thinking it might be best to have the jumper connected in the diagnostic plug, as for doing timing adjustment, while doing this so the ECU doesn’t keep doing things that will compensate for the TB adjustments being made.  Otherwise whatever you adjust will get overridden by the ECU to maintain the idle revs right???